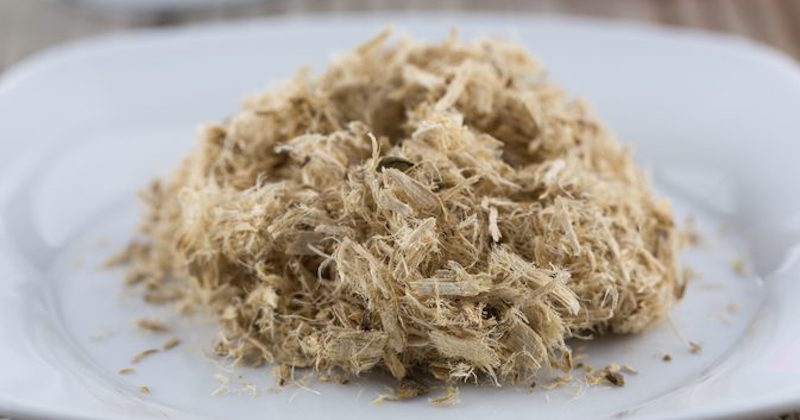 Slippery elm is most often used as a demulcent, thanks to the ability of mucilage to form a layer of gel-like substance after coming into contact with water or any other liquid.

This alleviates irritation and inflammation, allowing the underlying tissues to heal more effectively. The astringent properties of the tannins present in slippery elm contribute to the plant’s healing potential by coating tissues below the mucilage gel with an extra layer of precipitated proteins and amino acids.

Dry cough: Experienced herbalists often use slippery elm for demulcency not only in the gastrointestinal tract, but in the respiratory and urinary systems as well, through complex reflexes based on the similar embryonic development of these tissues. Therefore, slippery elm is often used to treat cases of dry cough, bronchitis, and even reducing irritability of the gallbladder and urinary bladder.

Gastroesophageal reflux disease (GERD), heartburn and acid reflux: There is evidence that slippery elm could contribute to the treatment of gastric reflux, sometimes referred to as heartburn. By coating the lining of the stomach and esophagus with soft mucilage, slippery elm helps to reduce unpleasant digestive symptoms related to GERD as well as soothe local inflammation of the esophagus due to back-flow of gastric juice.

Inflammatory Bowel Disease (IBD):  In vitro studies indicate that slippery elm is an effective scavenger of free radicals comparable in action to 5-aminosalicylates, which are the most widely used conventional drug for the treatment of inflammatory bowel diseases (such as Crohn’s disease and ulcerative colitis, among others). Apparently, this antioxidative action is based on the fairly high content of flavonoids present in the slippery elm bark.

Irritable bowel syndrome (IBS): Although slippery elm has been used for centuries to treat diarrhea and constipation (both are prominent features of IBS—irritable bowel syndrome), there is emerging evidence that this could be scientifically valid as well. Studies indicate that preparations containing slippery elm bark could aid in improving bowel movement and alleviating such symptoms of IBS as bloating, straining, and abdominal pain. Most likely, this is due to the demulcent and laxative properties of slippery elm’s mucilage.

Inflamed skin and healing of wounds: The mucilage present in slippery elm acts as an emollient when applied topically on the skin, alleviating inflammation and dryness. When dried, mucilage also acts as a mild adhesive and thus can be used as an all-natural herbal “bandage” for minor wounds. The tannins present in the plant further enhance this action by acting as astringents on the surface of the exposed tissues.

Natural and safe laxative: Mucilaginous herbs and mushrooms have been traditionally used as laxatives for their double action, namely bulking (good quality slippery elm bark swells to 50-140 times its original volume) and as a fecal lubricant (coating the feces with a friction-reducing gel).

Prebiotic: Slippery elm is rich in both soluble and insoluble dietary fiber that’s only partially digested in the gastrointestinal tract. As such, these nutrients act as “food” (prEbiotics) for the prObiotics—beneficial bacteria that naturally live in the human bowels. Therefore, slippery elm can be rightfully considered a natural prebiotic and used as a complementary treatment of intestinal dysbiosis, antibiotic-associated diarrhea, and similar health conditions.

Psoriasis:  There is emerging evidence that slippery elm could aid in the treatment of such chronic skin conditions as psoriasis, most likely by alleviating local bowel inflammation, improving bowel permeability to beneficial nutrients, and trapping potential allergens in the mucilage.

Sore throat:  Studies indicate that phytochemical-rich plant extracts of slippery elm can suppress antigen-induced inflammation of the tonsils, thus alleviating tonsillitis—one of the forms of sore throat. Also, by acting as a demulcent, slippery elm preparations (such as teas and decoctions) could help to coat the inflamed tissues in soft mucilage, reducing local pain and irritation.

How To Use Slippery Elm

Due to slippery elm’s mucilaginous gel-forming nature, it is advisable to drink more water when ingesting this herb.

For stomach and upper intestinal problems such as reflux or stomach ulcers, slippery elm is best taken after meals. For lower intestinal/bowel problems, it is most effective taken 1-2 hours before meals.

Powder: Slippery elm is most often prepared and taken as a decoction. To do so, add about 1 tablespoon of powdered slippery elm bark (roughly 5 grams) into 400-500 ml of water. Bring to a boil, simmer for about 30 minutes, allow to cool down and take as a mucilaginous preparation.

To make a poultice for topical applications, gradually add boiling water into slippery elm bark powder until a thick paste is formed. Cool down until comfortable to the touch, then apply to the skin. Attention! DO NOT apply poultices to open (bleeding) wounds, as particles of the paste could end up trapped in the healing lesion. Apply healing poultices only on local inflammations, irritations, burns, and closed wounds.

Tincture: When taken in the form of alcohol extracts (tinctures), the usual dose is about 5 ml three times per day unless otherwise prescribed.

Tea bags: Making slippery elm tea is another convenient way to enjoy its benefits. Steep a tea bag in a cup of boiling water for about 15 minutes, and add a teaspoon of raw honey for taste, if desired.

There are no reports on acute or chronic toxicity from ingesting slippery elm. As long as no contraindications are present, this plant can be considered fairly safe to take.