Where to Buy Twin Gear Juicers

Much like as with single gear masticating juicers, twin gear juicers can be found from many online retailers, specialty juicing shops, and occasionally in non-specialized stores. Keep in mind when looking for twin gear juicers that they are even less common than single-gear masticating juicers, as they are seen as a more complex juicer in a market that prefers simple and fast.

What Are Triturating (AKA: Twin Gear) Juicers? How Do They Work?

A triturating juicer operates in the same fashion as a single auger juicer, except that it has a second auger that counter-rotates against the first auger. 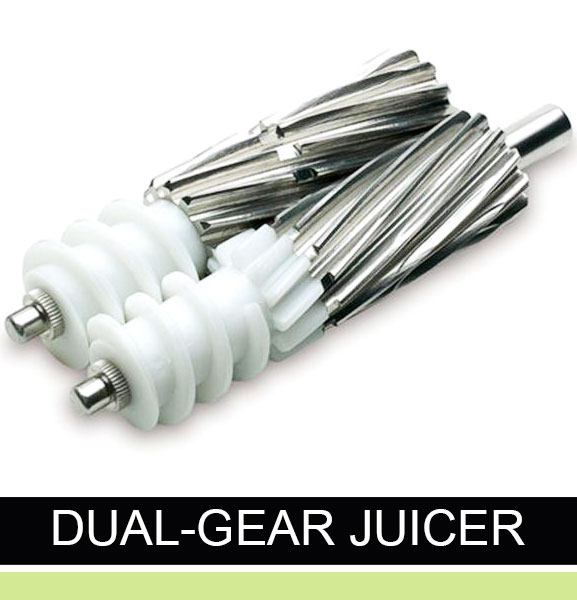 The dual gears provide several advantages, the first being that it effectively doubles the surface area that any produce dropped in to be juiced will be pressed against. As well, the counter-rotation of the augers will crush produce between them at the same time.

This allows for more pulp to be pressed more quickly, however, these juicers are still very low RPM, most commonly under 150 RPM, and cannot match the speed of a centrifugal juicer. The primary function of a triturating juicer is to maximize juice extraction while at the same time being slightly faster than a single auger juicer.

In today’s market, 99% of twin gear juicers are of either the vertical or horizontal type.

A vertical twin gear juicer has a feed chute at the top of the juicer, which feeds into the end of a dual auger tube. The augers grab the produce, dragging it along their length by both gravity and mechanical action, crushing and extracting juice the entire time.

At the base of the augers, the pulp is usually pressed against a filter and then diverted into a pulp extraction chute or container. The juice passes through the filter and is extracted via a spout to an external container of your choosing, although many vertical juicers have a stop that allows the juice to be held back momentarily should you need to change containers.

The horizontal type of twin gear juicer is by far more common. The power unit is housed in a block, usually, stainless steel, that the augers protrude out of down a juicing spout. The feed chute is normally located at the rear of the augers, where it is grabbed and pushed forwards while being crushed and pulped by the action of the augers.

It is normally pushed against a filter along the length of the tube, however, some horizontal types only have a filter above the extraction spout. Once the juice has been extracted, there is normally a small opening at the end of the juicing tube that pulp will exit from.

Due to the two augers, and hence the doubling of the juicing area, even more juice can be extracted from produce, and a more complete pressing of the pulp results in more juice.

As well, even though the augers rotate faster than in a single gear juicer, the extra surface area keeps the juice cold, keeping the nutrients and enzymes intact.

While we focus on mostly fruits and vegetables, twin gear juicers have the ability, due to their normally higher torque and the crushing action of the dual augers, to extract liquids from some items that would jam a single gear juicer.

One such example is that twin gear juicers, with some preparation, can crush nuts to create nut milk or butter. The resulting pulp is also extremely protein-rich and still retains the flavor of the nuts, and can be used for recipes, snacking, or composting.

While a single gear juicer lasts a very long time if used correctly, a twin gear juicer will normally not see any degradation in service for many years if used according to the manufacturer’s directions.

In some cases, the warranties on these triturating juicers will cover all aspects of usage for 10, 12, and in the case of Omega juicers, even 15 years of service!

Slower than a Centrifuge

As with single gear juicers, any type of masticating juicer will not be able to match the speed of a centrifugal juicer. As well, despite being faster than a single gear juicer, a twin gear masticating juicer realistically only doubles the speed, meaning it will still take many minutes of feeding and extracting to produce a decent quantity of juice.

As a rule, a twin gear juicer is almost always more expensive than a single-gear juicer. There are some extremely specialized examples, usually in commercial-grade juicers, where this is not a rule, but for the purposes of home-based juicing, you should (realistically) be expecting to pay between $500 and $1000 for a very good twin gear juicer.

Quite Heavy & Can Be Quite Large

If portability or space-saving is of primary concern to you, a twin gear juicer is possibly not the right solution. As there are twice as many mechanical components and often a more potent power source, the body of the juicer is usually quite large, equivalent in size to a smaller two-slice toaster.

Add on the augers, feed chute, spout, pulp container, and all other attachments, and the juicer can take up a significant amount of countertop real estate.

The Right Juicer for You

There are pros and cons to any juicer, including triturating juicers. If you’re ok with sacrificing speed for a powerful juicer that produces nutrient-dense juice, then a triturating juicer might be the right fit for you.

You can see our recommendations for the best triturating juicers here, including budget and high-end options.

However, if the price and speed don’t have you sold on a triturating juicer, then another juicer type may be a better fit. Single-gear masticating juicers have many of the same benefits while being a bit more affordable. Centrifugal juicers are also often more budget-friendly, and juice much more efficiently. Whatever juicer you choose, be sure to check back for the latest reviews and recipes!