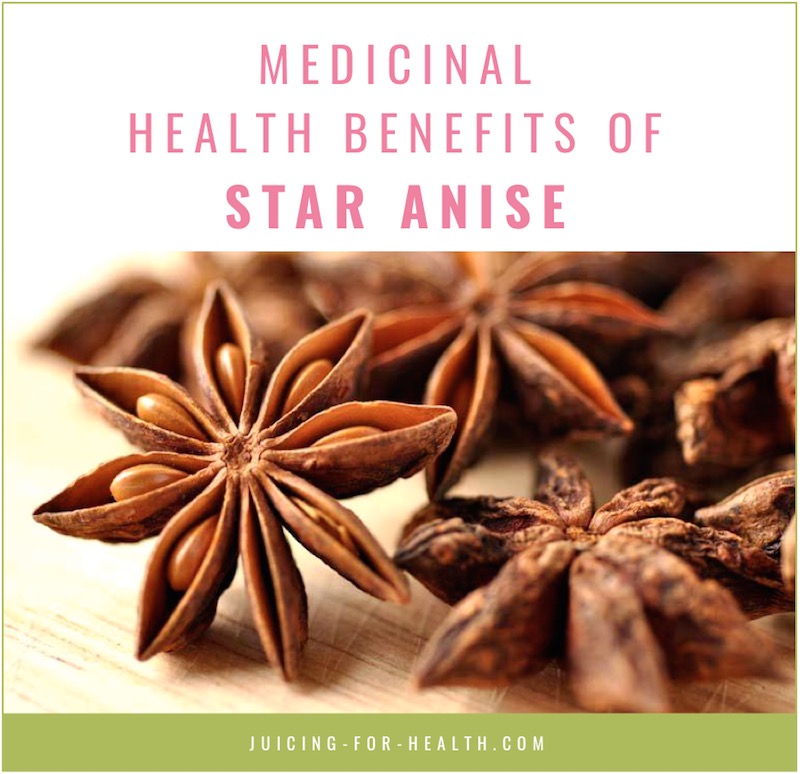 Notable Phytonutrients In Star Anise And Their Features

It is estimated that about 90% of all the star anise cultivated worldwide isn’t even used as a spice for culinary purposes. Instead, it’s valued as a source of shikimic acid, a natural compound used in the production of the conventional anti-influenza drug oseltamivir (Tamiflu).

Although star anise doesn’t have any anti-viral properties itself, it’s still widely used to fight off bacterial and fungal infections.

For instance, anethole, one of the primary compounds of Chinese star anise, has been confirmed to be effective against various bacteria, fungi, and yeasts. Some other studies reported star anise is even effective as a natural pesticide that’s safe for human health!

How To Use Star Anise

Of course, the easiest way to have more of star anise in your life is just to use this spice in your cooking more often.

Star anise isn’t really traditional to the Western world, but you can find it listed as an essential ingredient for numerous Asian dishes.

In Indian cuisine, star anise is one of the spices used in garam masala, as well as in biryani and masala chai.

In Vietnamese, pho soup and various other meat dishes.

In Chinese cooking, star anise is one of the main ingredients in the Chinese five spice powder (star anise, cumin, cinnamon, peppercorns and cloves), that is used for seasoning meat.

Many people also enjoy throwing some star anise pods into their coffee to enrich the beverage’s flavor and add some licorice-like undertones to it. A single pod can be used 2-3 times this way.

You can also brew a star anise tea by putting 1-2 whole star anise pods in a cup, filling it with boiling water, and letting steep for about 10 minutes. Combine with cinnamon for extra spiciness!

Always store spices in airtight containers away from moisture and heat. Whole star anise has a long shelf life and could probably last for a couple of years. Whereas star anise powder is freshest in its first six months.

Hypersensitivity to any plant of the Schisandraceae family or star anise specifically.

It’s recommended to abstain from taking star anise in any way during pregnancy and lactation, as well as giving it to children due to the potential contamination of the spice with toxic Japanese star anise (read more below).

People with impaired kidney or liver functions are also recommended to stay clear of star anise unless 100% confident of the purity of the spice.

The cultivation of Japanese star anise and the import of Chinese star anise are carefully monitored to prevent any cross-contamination, so cases of intoxication are extremely rare. Nevertheless, you should know that it’s still possible.

For instance, in 2004 the American Academy of Pediatrics reported on 7 cases of severe neurological reactions in babies who received star anise tea that was contaminated with the Japanese toxic variety of the plant.

Although such cases are rare, they are still real. Avoid giving anise tea to children, as well as pregnant or lactating women. Just in case.

Another important thing is that it’s impossible to tell apart the harmless star anise from its toxic variety without lab tests. The only two approaches to distinguishing the two are quite vague:

So, again: it’s almost impossible to buy Japanese star anise accidentally, as the market dealing with this plant is carefully controlled due to the plant’s toxicity. No seller or company would like to get in trouble for accidentally killing someone with a toxic spice, but it’s still important to stay alert at all times.