Burdock root has many fabulous actions but its alterative properties are undoubtedly the strongest. This plant can strengthen the immune system (mainly thanks to the flavonoid quercetin), boost resistance to viral and bacterial infections, fight certain tumors and significantly reduce oxidative stress.

Burdock root has been traditionally used for centuries as a digestive stimulant, natural diuretic, and blood and lymph purifier.

Anti-aging:  Burdock leaf extract may contribute to skin care by inhibiting elastase (an enzyme that breaks down elastic fibers) when applied topically. This leads to a drastic improvement in skin elasticity and visibly reducing wrinkles.

Anti-inflammatory:  Burdock root has prominent anti-inflammatory properties that are especially prominent in the liver, making this plant a fabulous liver protector. It effectively calms liver enzymes, reduces inflammation, and improves the liver function.

Mainly thanks to its antioxidant properties, burdock root preparations effectively alleviate inflammation and support the regeneration of inflamed tissues. For instance, several studies have confirmed this action in knee osteoarthritis and inflammatory bowel diseases.

Antitumor:  Possibly due to its powerful antioxidant properties, burdock root shows significant antitumor properties by reducing proliferation and inhibiting metastasis in certain cancers. The most drastic effect has been confirmed on breast cancer and prostate cancer cells.

Antiviral properties:  Laboratory studies indicate that arctiin and arctigenin, burdock’s main lignans, show significant antiviral properties against such viruses as the influenza one, once again confirming the fabulous alterative properties of this plant.

Blood vessel functions:  The inner lining of the blood vessels is known as the endothelium, and it has a number of important functions including nitric oxide (NO) synthesis and blood-clotting regulation. Burdock seeds are known to improve endothelium function, thus lowering risks of such cardiovascular diseases like arterial hypotension and atherosclerosis. The roots of this plant may have a similar effect thanks to their antioxidant properties.

Body weight and blood cholesterol: Thanks to its incredibly high content of dietary fibers, burdock root can help in losing weight and controlling blood cholesterol levels. Some other studies indicate that the inulin present in burdock root can help to reduce fat deposits in the liver and muscles. In general, this could help to reduce the risk of developing diabetes and all sorts of cardiovascular diseases including arterial plaque (atherosclerosis).

Lymph cleanser:  Due to its diuretic and cleansing nature, burdock root is one of few herbs that can help stimulate lymphatic drainage. Drinking 3 to 4 cups of burdock root tea a day for one to two weeks, helps to remove congestions from the lymphatic system.

Being a rich source of inulin, burdock root is likely to be a highly effective prebiotic, a substance that promotes the intestinal growth of beneficial bacteria. 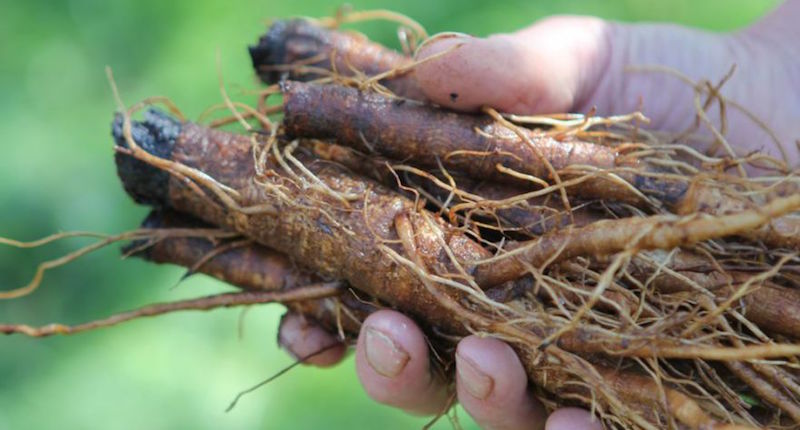 How To Use Burdock Root

Burdock root is technically a root vegetable, so you may most likely find it in most Asian markets (occasionally at farmers market). Get it if you see it, it will change your life!

The easiest and most natural way to take burdock root is to eat it fresh, just like any other vegetable. In terms of taste, it can be described as somewhat resembling celery root—crunchy, mildly sweet, often called “earthy”. Since burdock root is a popular ingredient in eastern cuisines, finding a recipe to your taste won’t be hard at all!

Alternatively, you can just purchase a burdock root supplement which usually come in form of tinctures, powders, or capsules. Follow the instructions provided by the manufacturer for optimal effect.

You can use raw burdock root to prepare homemade decoctions:

As a rule, burdock root is tolerated incredibly well. No cases of overdose or toxicity are known. However, there have been rare cases of allergies and even anaphylactic shock. Therefore, burdock should be avoided (or taken with extreme caution) by those people who know they are sensitive to any plants of the Asteraceae family including: