DEET Use Linked To Headaches, Joint Pain And Memory Loss, Use These Safe Bug Repellents Instead

A summer necessity, bug sprays keep insects away—but is it also bad for our health? Researchers are debating whether the anti-pest sprays with which we douse ourselves are putting our health in danger.

One chemical found in many repellents is DEET (N, N-diethyl-m-toluamide). Developed and tested in the 1940s and 1950s by the U.S. Army for use in jungle warfare during World War II, DEET is extremely efficient at repelling mosquitoes, ticks, fleas, chiggers and blood-feeding flies such as black flies and deer flies.

In addition to popular forms such as aerosols and pump sprays, DEET is also found in towelettes, lotions, creams and gels. The chemical keeps insects away for hours after application and can be applied over sunscreen.

But as long as DEET has been around, it has raised questions over its safety from consumers and scientists alike. Some are bothered by the smell, while others complain that it irritates the skin; many have felt the burning sting of accidentally spraying bug repellent over a minor cut.

Although the Environmental Protection Agency re-approved the use of DEET in 1998 after an extensive safety review, new data suggests that the substance may affect our cells in unintended ways. 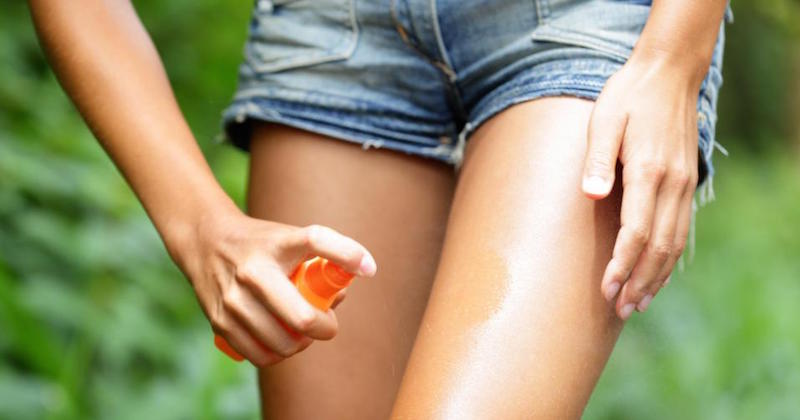 Why It Is Best To Avoid DEET-Containing Repellents

According to Dr. Mercola, “About 30 percent of Americans use DEET every year, but you should know that this chemical—though generally effective in keeping away insects—can have deadly repercussions. From 1961 to 2002, the Agency for Toxic Substances and Disease Registry reports eight deaths related to DEET exposure.”

The study, conducted by the Institute of Development Research in France, and published in the journal BMC Biology, found that chemicals that interfere with the action of cholinesterase can cause excessive salivation and eye-watering in low doses, followed by muscle spasms and in some cases, death.

Reports have shown that many who have been exposed to DEET have experienced a variety of side effects. These include:

He discovered that prolonged exposure to DEET can impair cell function in parts of your brain—demonstrated in the lab by death and behavioral changes in rats with frequent or prolonged DEET use. Other potential side effects to DEET exposure include:

Another potentially harmful chemical found in many bug sprays is permethrin. This chemical is a member of the synthetic pyrethroid family, all of which are neurotoxins.

The EPA has even deemed this chemical carcinogenic, capable of causing lung tumors, liver tumors, immune system problems, and chromosomal abnormalities. Permethrin is also damaging to the environment, and it is particularly toxic to bees and aquatic life. It should also be noted that permethrin is highly toxic to cats.

One of the newest arrivals on store shelves is picaridin, a substance derived from pepper that is popular in Europe and Australia. Studies by its manufacturer suggest that picaridin lasts for two to eight hours and is just as effective as DEET, is less oily and completely odorless. Independent studies by the EPA are underway.

Another bug repellent on the market is the chemical IR3535, which has also been growing in popularity since its approval in the U. S. about adecade ago. Available in Europe for 20 years, numerous studies have confirmed the effectiveness of IR3535, which can offer protection for up to 10 hours.

A formulation that consists of 20 percent IR3535 is “very effective,” entomologist Daniel Strickman of the U.S. Department of Agriculture told LiveScience, a sister site of Life’s Little Mysteries. “It’s the only repellent active ingredient that has never caused an adverse effect.”

The EPA strongly recommends that consumers carefully read the instructions on bug spray products before using them in order to ensure that they are applied safely, particularly on children.

Other steps to ensure that you’re applying bug spray in the safest way possible include:

“Naturally, the best way to avoid mosquito bites is to prevent coming into contact with them in the first place. You can avoid insect bites by staying inside between dusk and dawn, which is when they are most active.

Mosquitoes are also thicker in shrubby areas and near standing water. The American Mosquito Control Association (AMCA) recommends the “Three Ds” of protection to prevent mosquito breeding on your property:7

Make Your Own Mosquito Repellent

One natural way to keep the mosquitoes from eating you alive to is make your own bug spray. To make your own all-natural DEET-free mosquito repellent try this recipe by Dr. Axe:

This article is shared with permission from our friends at livescience.com.