Alcohol Poisoning: How Much Is Too Much And Long-Term Effects

Some people believe that an occasional glass of red wine can benefit your health. Regardless of the merits of this view, too much red wine is a recipe for disaster.

Excessive alcohol consumption can lead to the lethal danger of alcohol poisoning too, which negatively impacts your health and may even cost you your life if it’s not properly addressed.

In the United States alone, there are an estimated 88,000 deaths and 2.5 million years of potential life lost (YPLL) reported yearly from 2006 to 2010 due to alcohol poisoning, hacking off an average of 30 years on the lives of those who died. 1

What Is Alcohol Poisoning?

Alcohol poisoning impairs the body and eventually can shut down the areas of the brain that control basic life-support functions like breathing, heart rate, and temperature control.2

You become more susceptible to alcohol poisoning when you:

Alcohol poisoning comes with very serious health penalties, which is why it’s very important to be well-informed about what symptoms you need to watch out for. Below are some of the most common telltale signs of alcohol poisoning:3

If you noticed any of these symptoms, call 911 for help immediately.

Generally, women are more susceptible to alcohol poisoning. They feel the effects of alcohol faster than men of the same size. Unfortunately, they’re also more predisposed to suffer from long-term alcohol-induced damage in the body. This is due to several physiological reasons, such as: 4

Nevertheless, this does not mean that men are completely safe from the dangers of alcohol poisoning. Below are a number of other factors that affect your body’s response to alcohol, regardless if you’re male or female:

How much water you drink, how often you drink, your age, and your family history are potential risk factors as well.

Blood alcohol content (BAC), also called blood alcohol concentration, refers to the amount of alcohol in your bloodstream. It is expressed as the weight of ethanol measured in grams in 100 milliliters of blood or 210 liters of breath. BAC can be measured either through a breathalyzer test, a blood test, or a urine test.

For example, a BAC of 0.10 means that 0.10% (one-tenth of one percent) of your blood, by volume, is alcohol. All 50 states have now set .08% BAC as the legal limit for Driving Under the Influence (DUI). For commercial drivers, a BAC of .04% can result in a DUI conviction nationwide. For those under age 21, there is a zero tolerance limit―any amount of alcohol is grounds for a DUI arrest.5

To calculate your current blood alcohol content, there are free online sites and apps you can try like BloodCalculator.org and iDrinkSmarter. BAC results may vary depending on several variables, which include your gender, personal alcohol tolerance, body weight, and body fat percentage.6

How Much Alcohol Is In Your Drink?

Basically, a standard drink contains 0.6 ounces of pure alcohol, which is usually found in:7 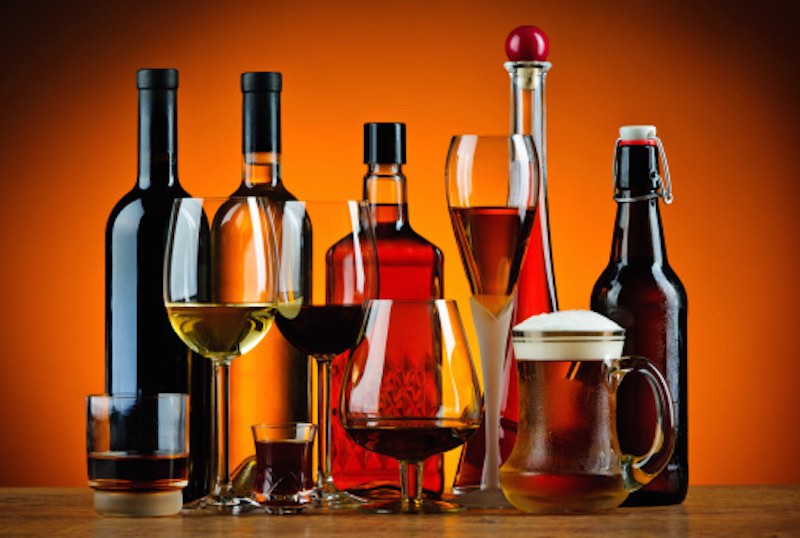 Various brands and types of alcoholic beverages come with different alcohol content levels. To have an idea how much alcohol your favorite drink contains, check out this chart below: 8

If left untreated, a person suffering from alcohol poisoning can:9

Long-Term Effects Of Alcohol In Women

A woman’s body has less tolerance for alcohol compared to men, therefore, it’s more susceptible to the damaging effects of alcohol poisoning. Numerous studies have linked these health consequences to excessive drinking in women, which include:

Alcohol is also a common risk factor in many cases of sexual assault, particularly among young women. About 1 in 20 college women are sexually assaulted each year, and research suggests that there is a higher likelihood of rape or sexual assault when both the victim and the attacker are under the influence of alcohol before the incident.15 16

Dos And Don’ts With Alcohol Poisoning

Alcohol poisoning is a serious and potentially life-threatening condition.

It is not something to be ignored believing that it will pass and go away the following day. If you believe that someone you know could be suffering from alcohol poisoning, here are some steps that you can do and avoid doing to comfort them while waiting for help:

Lastly, don’t wait for all the symptoms of alcohol poisoning to show up and don’t hesitate to call for emergency medical help immediately. Remember, BAC levels can rise rapidly, and time is of the essence in this situation. Being a minute too late could mean irreversible damage or even death.

How To Prevent Alcohol Poisoning And Long Term Effects

It does not take rocket science to know how you can prevent yourself or your friends from suffering from alcohol poisoning. I believe the first step, and probably the most important one that you can take, is to practice self-control.

Avoid and discourage your friends from participating in any alcohol drinking challenge, which is a surefire way to get alcohol poisoning.

However, if you really must have a few drinks, I personally recommend taking this natural protocol beforehand to pretox your body:

These pretox measures are imperative for supplying your body with the vitamins, antioxidants, and other nutrients to protect your liver and assist in the breakdown and removal of alcohol from your system.

Other practical measures that may help include:

In addition, I also advise against drinking when you’re feeling down, or worse—depressed, as this can only lead to unconscious and uncontrolled alcohol consumption.

Note that alcohol can alter your brain chemistry and lower the levels of serotonin, a mood-regulating chemical in your brain, increasing your anxiety and stress instead of reducing it.

Rather than falling into the vicious cycle of alcohol abuse, I recommend addressing your emotional health as soon as possible.