I don’t recommend storing your food in plasticware or cooking in them in a microwave oven, but if you’re going to use either, at least don’t use them together. Microwaving food in a plastic container virtually guarantees that your food will be contaminated with plastic chemicals that will leach into your food during the heating process.

There’s no arguing that plastic is convenient, inexpensive, and virtually unbreakable, making it tempting to be used for food storage, especially while you’re out and about. However, though it seems perfectly safe, plastic is made with a veritable stew of chemicals. 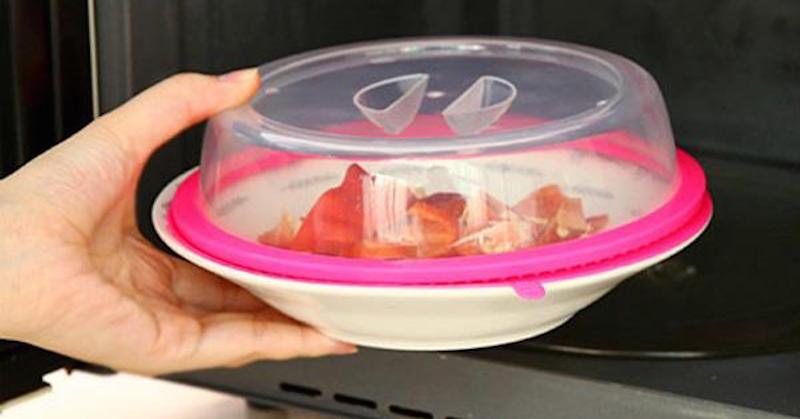 What’s Lurking In Your Plastic Containers?

Depending on what product you’re using, your plastic might contain phthalates, for starters. Phthalates are a group of “gender-bending” chemicals causing males of many species to become more female.

These chemicals have disrupted the endocrine systems of wildlife, causing testicular cancer, genital deformations, low sperm counts, and infertility in a number of species, including polar bears, deer, whales, and otters, just to name a few.

In humans, phthalates have been linked to preterm birth and neurobehavioral problems in infants after in-utero exposure.1 They’ve also been found to increase blood pressure levels,2 and high urinary levels are associated with insulin resistance, which can lead to diabetes.3

While the replacement chemicals haven’t been widely studied, BPA is a known endocrine disruptor that’s been linked to a number of health concerns, particularly in pregnant women, fetuses, and young children, but also in adults, including:

What else might be lurking in your plastic? Commercial-grade cling wrap (which may be used to wrap cheese or other deli items) may be made from polyvinyl chloride (PVC), which is known to cause cancer. The manufacture of PVC also leads to the formation of dioxin, another carcinogen.

Styrofoam food trays, egg cartons, carryout containers, and opaque plastic cutlery may contain yet another chemical known as styrene, which has been classified as a possible human carcinogen by the International Agency for Research on Cancer (IARC).

Heating Accelerates The Transfer Of Chemicals To Your Food

In a study of common plastic products, 70 percent tested positive for estrogenic activity, which means they’re capable of disrupting your hormone levels.4 However, that was before researchers subjected them to conditions in which they’re actually used.

Under real-world conditions like running the plastics through a dishwasher or heating them in a microwave, 95 percent tested positive for estrogenic, hormone-disrupting activity.

While regular use, such as washing in a dishwasher and scratches, has been found to increase the rate of chemical leaching, heat appears to be the worst offender of all, increasing the rate of chemical transfer by up to 55-fold. As written in the journal Toxicology Letters:5

“Using a sensitive and quantitative competitive enzyme-linked immunosorbent assay, BPA was found to migrate from polycarbonate water bottles at rates ranging from 0.20 ng/h to 0.79 ng/h.

At room temperature the migration of BPA was independent of whether or not the bottle had been previously used. Exposure to boiling water (100 degrees C) increased the rate of BPA migration by up to 55-fold.”

In the US, the National Institute of Environmental Health Science recommends consumers avoid microwaving food in plastic containers because heat increases the likelihood of chemical leaching.6

The US Food and Drug Administration (FDA) recommends any plastic containers you use in the microwave should be labeled for microwave oven use.7 But such containers may not be much safer than standard plastics.

“Microwaveable” containers may be formulated with supposedly “safer” chemicals. Diisononyl phthalate (DINP) and diisodecyl phthalate (DIDP), for instance, have been used to replace di-2-ethylhexylphthalate (DEHP), an endocrine-disrupting phthalate known to cause reproductive toxicity.

DEHP is highly lipophilic (fat soluble), and when used in PVC plastic is only loosely chemically bonded to the plastic. It readily leaches into blood (when used in IV tubing, for example) or other lipid-containing solutions in contact with the plastic.

DINP and DIDP have been touted as safer alternatives, but they, too, have been linked to health concerns, including high blood pressure.8 Microwaving food in #7 polycarbonate plastic, in particular, should be avoided, even if it is labeled microwave-safe.

According to the National Resources Defense Council (NRDC):9

“What the term ‘microwave-safe’ basically means is that any chemicals leaching from the container into food do so at levels far below those shown to have any health effects.

There is cause to be wary of this claim, however. In particular, #7 polycarbonate plastic should not be used in a microwave, even if it is labeled ‘microwave-safe,’ because it leaches hormone-disrupting bisphenol A (BPA), especially when heated.”

I would expand this to say that there is really no such thing as “microwave-safe” plastic. There are many chemicals that could potentially leach into your food, and it’s unclear which are tested for and what levels are deemed “safe” for consumption.

For instance, the Nutrition Action Newsletter reported the leakage of numerous toxic chemicals from the packaging of common microwavable foods, including pizzas and popcorn. Chemicals included polyethylene terephthalate (PET), benzene, toluene, and xylene.

Microwaving fatty foods in plastic containers also leads to the release of dioxins and other toxins into your food.10 11 You’re far better off heating your food in glass or ceramic containers over the stove—and not in a microwave at all.

At the very least, banish all plastic products (containers, plastic wrap, food wraps, etc.) from ever seeing the inside of your microwave. Even better, banish your microwave altogether.

Microwaves heat food by causing water molecules in it to resonate at very high frequencies and eventually turn to steam, which heats your food. While this can rapidly heat your food, it also causes a change in your food’s chemical structure. The first thing you probably noticed when you began microwaving food was how uneven the heating is.

“Hot spots” in microwaved food can be hot enough to cause burns—or build up to a “steam explosion”. This has resulted in admonitions to new mothers about NOT using the microwave to heat up baby bottles, since babies have been burned by super-heated formula that went undetected (not to mention the issue with plastic toxins leaching into the milk).

Microwaving distorts and deforms the molecules of whatever food or other substance you subject to it. An example of this is blood products. Blood is normally warmed before being transfused into a person. Now we know that microwaving blood products damages the blood components.

In fact, one woman died after receiving a transfusion of microwaved blood in 1991, which resulted in a well-publicized lawsuit. Further, when you heat food in a microwave, it can zap the nutrition right out of your food. Some excellent scientific data has been gathered regarding the detrimental effects of microwaves on nutrients:

Related: 8 Terrible things microwave ovens can do to you and your food.

In the US, chemicals are considered safe until proven otherwise. You don’t want to risk your health by exposing yourself to these toxins unnecessarily, especially in your food but also in your personal care products and goods around your home.

Implementing the following measures will help you avoid the worst endocrine-disrupting culprits as well as other chemicals from a wide variety of sources. To sum it up, try to stick with whole foods and natural products around your home.

The fewer ingredients a product contains, the better, and try to make sure anything you put on or in your body—or use around your home—contains only substances you’re familiar with. If you can’t pronounce it, you probably don’t want it anywhere near your family.