Specific Tuna Fish Not To Eat To Avoid Radiation Contamination

Studies suggest that all bluefin tuna caught off the U.S. West Coast are likely carrying radioactive isotopes from the 2011 Fukushima disaster.

That’s just one more reason to avoid eating Pacific bluefin tuna, which are considered critically endangered. Over-fishing has reduced their population to only 3.6 percent of its historic levels. It is unknown what further effects radiation poisoning might have on this threatened fish. 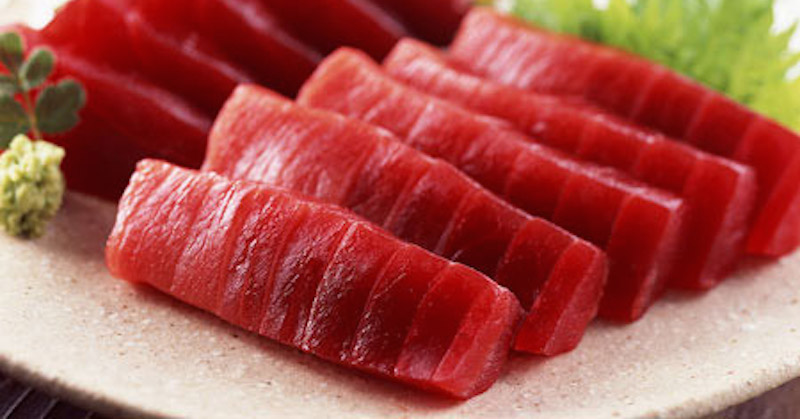 In March 2011, a massive earthquake and tsunami triggered multiple meltdowns at Japan’s Fukushima Daiichi nuclear power plant. Explosions launched enormous amounts of radioactive material into the air, most of which settled into the Pacific Ocean. Since then, radioactive material has continued to leak into the ocean from the plant.

Since radioactive cesium floats, it is easily swallowed by fish, and steadily moves up the aquatic food chain. As top predators, tuna tend to accumulate this and other toxins in their bodies.

“We found that absolutely every one of them had comparable concentrations of cesium 134 and cesium 137” researcher Nicholas Fisher said.

Overall levels of radioactive cesium had increased 3 percent in the year since the Fukushima disaster.

That study took place relatively soon after the disaster, when exposure to radioactivity from Fukushima was likely minimal. Now, Pacific bluefin tuna being sold for consumption have spent nearly their entire lives being exposed to this radiation.

A 2013 assessment by the International Scientific Committee for Tuna and Tuna-Like Species in the North Pacific Ocean (ISC) found that roughly 90 percent of Pacific bluefin tuna caught have not yet reached maturity, which occurs at about five years. The Fukushima disaster took place about five years ago, in March 2011.

Because Pacific bluefins spawn in the waters off the coast of or near Japan, they are bathed in intense Fukushima radiation from the beginning of their lives. They then swim across the entire ocean, taking the same path as the massive radiation plume that continues to drift toward North America.

It’s not just Pacific bluefins that are being turned radioactive. A 2014 study conducted by researchers from Oregon State University and published in the journal Environmental Science and Technology found even more dramatic effects of the Fukushima disaster on sea life, particularly on Albacore tuna.

The researchers compared levels of radioactive isotopes in tuna caught off the coast of Oregon between 2008 and 2012. They found that following the Fukushima disaster, levels of radioisotopes tripled.

Lead researcher Delvan Neville attempted to minimize the risk of eating this fish, saying, “A year of eating albacore with these cesium traces is about the same dose of radiation as you get from spending 23 seconds in a stuffy basement from radon gas, or sleeping next to your spouse for 40 nights from the natural potassium-40 in their body,” he explained. “It’s just not much at all.”

But Neville admitted that no radiation exposure is actually safe.

“You can’t say there is absolutely zero risk because any radiation is assumed to carry at least some small risk,” he said.

You may also read about tilapia and why you should never eat tilapia that is farm bread.

This article was originally published by NaturalNews. It has been republished with permission.