This must be one of the finest Candida eradication supplements made, as the manufacturer emphasizes on the importance of …

12 Most Potent Antifungal Herbs That Go Into CanXida Remove

Garlic has powerful anti-bacterial and anti-fungal properties and several scientific studies have found it to be as effective as the popular anti-fungal pharmaceutical drugs Ketoconazole and Nystatin in destroying candida albicans.

One important difference between taking drugs like antibiotics and antifungals, and taking garlic, is that bacteria and fungi are not likely to develop a resistance to garlic. Unlike other Candida dietary supplements, the aged garlic extract in CanXida Remove is standardized to contain 2% allicin, the active and powerful ingredient.

Caprylic acid is a short chain fatty acid derived from the coconut, which has been found to be a very effective antifungal agent, especially in the control and maintenance of normal healthy micro-organisms in the digestive tract. Caprylic acid works best in conjunction with Undecylenic acid, but these two fatty acids are rarely found together in the one Candida supplement unfortunately.

Undecylenic acid is a fatty acid that comes from the castor bean. It has proven to be a most effective antifungal agent and is the active ingredient in many over-the-counter antifungal preparations. The problem with this mono-unsaturated fatty acid is that it is sensitive to pH imbalances commonly found in those with Candida.

Many people with Candida have shown to have alkaline pH issues with their small intestine, directly due to the yeast infection and levels of bad bacteria commonly encountered. Unfortunately most who recommend this fatty acid are not even aware that there are potentially serious delivery issues with undecylenic acid, it is more difficult to use effectively than caprylic acid. All you need to do is to add Betaine HCL to overcome this issue, and here’s why … (see next ingredient).

This ensures that the undecylenic acid will work exactly where you want it to, in the duodenum and ileum, the two parts of the small bowel mostly effected by candida, thus avoiding the release of excessive bicarbonate (an alkaline solution) produced by the pancreas which would potentially render this fatty acid useless as an antifungal.

Many people with yeast infections have multiple issues with their digestive system, including their stomach, pancreas, small and large intestine. It was important, therefore, to add Betaine HCL in this formula containing both caprylic and undecylenic acid to overcome this issue.

The renowned American Research Institute has found grapefruit seed extract to be effective in the treatment of over 800 different kinds of bacteria and viruses and over 100 yeast and fungi species, in addition to inhibiting and killing many different species of parasites.

Black walnut extract was chosen due to its ability to kill a wide range of pathogens, including yeasts, bad bacteria, and is used for expelling worms and many different kinds of parasites that can affect people with Candida.

Black walnut contains a chemical called juglone, and a study at the University of Mississippi (1999) found juglone to be as effective as commercially available antifungals such as zinc undecylenate and selenium sulfide. Black walnut extract also contains tannins that kill parasites, and it was included in this formula.

Several compounds from Pau d’arco have demonstrated to have strong anti-candida effects. Lapacho, the other name for this remarkeable rainforest tree, has often been singled out as one of the premier herbal solutions for Candida yeast infections and after many years of laboratory research by the mid 1970s, the list of proven active ingredients in Pau d’arco that inhibit Candida and other fungi had grown to several dozen. Any formula that claims to be antifungal is incomplete without this amazing herb. CanXida Remove contains authentic Pau d’arco, because adulteration is common with this expensive herbal medicine.

Neem is not commonly found in Candida formulations. A 2011 study published in the Brazilian Journal of Microbiology concluded that even at the lowest of concentrations, neem extract produced an excellent antifungal activity against a wide range of Candida, Aspergillus and Microsporum yeast species.

Neem is a tree from India that has been used for centuries to prevent many different kinds of infections in humans; it is being increasingly used in the West as a safe and highly effective insecticide and anti-parasitic.

Berberine is a natural antibiotic chemical found in certain herbal medicines. It has been shown to possess excellent antimicrobial activity against a wide variety of microorganisms like Candida albicans, E.coli, staph aureus giardia, entamoeba histolytica, trichomonas vaginalis, leishmania donovani as well as several other well-known parasites and many different types of detrimental bacteria.

CanXida Remove contains small amounts of a strong 85% standardized form to maximize the effectiveness and to enhance the activity of other antifungals like caprylic and undecylenic acid. Berberine works silently in the background, weakening and even killing yeasts, bad bacteria and parasites, allowing stronger fatty acid antifungals to do they job more effectively.

Berberine supports the mucous membranes and has an immune enhancing and cleansing effect on the mucosa of the throat, vagina and digestive system, in addition to acting as a liver tonic and helping the body secrete bile.

Studies of berberine have shown in particular that it markedly decreases the parasitic load and can rapidly improve the immune system’s profile. It is a most effective anti-parasitic herbal medicine and a must when treating any chronic yeast infection.

A laboratory study in 2009 at the University of Porto, Portugal found that an active component in clove called eugenol has proven to be one of the most effective antifungal agents yet discovered. The researchers found that eugenol showed inhibitory activity against almost all of the many fungal strains tested.

They discovered that yeast cells were ruptured and even died due to the damage inflicted by eugenol, but even better news was that they discovered that eugenol almost entirely prevented the production of hyphae by candida albicans. (Hyphae are branching filaments that extend out from the cells of candida albicans and other fungi and can penetrate tissues in the body).

The conclusion from the research was that eugenol has demonstrated a formidable antifungal activity against many fungal strains, including fluconazole-resistant yeast strains. Eugenol was even found to be effective against fungal strains that have become resistant to fluconazole (Diflucan), one of the most common and well-known antifungal drugs used in women’s yeast infections.

Biotin is a sulphur-containing coenzyme (vitamin) produced by the beneficial bacteria in healthy people with balanced Candida levels. Because beneficial bacteria are often compromised by a Candida overgrowth, Candida sufferers are particularly prone to a biotin deficiency.

Biotin has the ability to halt candida from turning into a hyphal or mycelial form, (harder to get rid of than the yeast itself), potentially causing more serious health problems. Biotin taken in the amount of at least 3 milligram per day can reduce the transformation cycle from the yeast to the fungus form, in order to avoid the spreading of the mycelial form of candida into the bloodstream, thus giving the opportunity for the yeast cells to invade almost all of the organs, including the brain, the interruption of this vicious cycle is a must and a priority and biotin will halt this progression.

The other reason for the inclusion of biotin is that certain people have a biotinidase deficiency, and may therefore have an increased risk of a more invasive form of yeast infection. Biotinidase is an enzyme that helps to recycle biotin in your body.

Oregano is one of the most potent natural antifungal agents. An advantage that oregano has against Candida is that the yeast cannot develop resistance against this particular antifungal, whereas other antifungals lose their efficacy against candida over time. How does oregano work against Candida? The answer lies in the researches below: 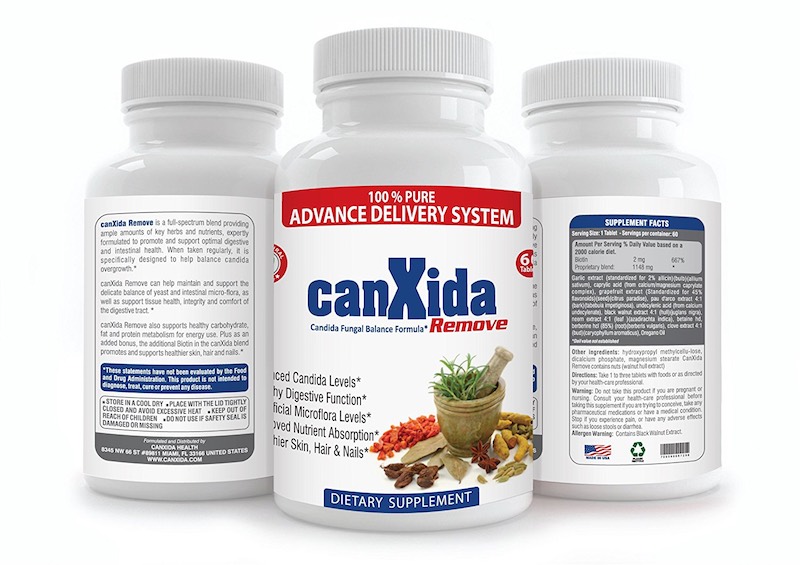 Serving size: 1 tablet up to 3x/day. Servings per container: 60 tablets.

How To Take Canxida Remove

There are 60 tablets per container. It is recommended to take up to 3 tablets a day in severe cases—1 tablet 3 times a day. Some people may benefit from taking just 1 or 2 tablets a day for mild to moderate cases. Take them 2 hours apart from any medications before meals.

If you’re on the gastrointestinal cleanse, then take Canxida 15 minutes after the fiber drink.

Typically, supplementing the product for a minimum of one month’s time is recommended, with the best results occurring anywhere from one to two months thereafter. Everybody is different though, so you may see results sooner or later, and it also depends on your condition.

CanXida Remove by itself works wonders for your body, but will work even better with proper Candida protocol.