Non-stick cookwares have become enormously popular because of its convenience. Foods slide right off, reducing the amount of elbow-grease required to clean the pan.

But there may be a high price to pay for this convenience, as the poly and perfluoroalkyl substances (PFAS) used to create these surfaces are toxic and highly persistent, both in your body and in the environment.

As you can tell by the names, PFAS are fluorinated chemicals. It’s actually the fluorine atoms that provide that hallmark slipperiness. I first became aware of the dangers of fluoride-impregnated non-stick coatings back in 2001.

I revised my cookware recommendations back then, and many of the health concerns I’ve warned about since then were recently confirmed by hundreds of international scientists. 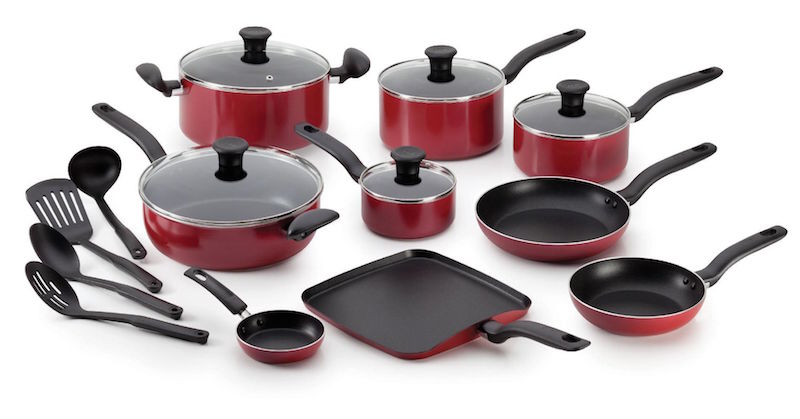 PFAS In Your Home, And In Your Body

When heated, non-stick cookware becomes a source of perfluorooctanoic acid (PFOA), a long-chain perfluorinated chemical linked to a range of health problems, including thyroid disease, infertility in women, and organ damage and developmental and reproductive problems in lab animals.

The US Environmental Protection Agency (EPA) has also ruled perfluorinated compounds (PFCs) as “likely carcinogens.” Despite that, these chemicals are still used in a wide array of household products. Besides non-stick cookware, PFCs are used to create heat-resistant and non-stick coatings on:

They’re also found in flame retardant chemicals (and, hence, items treated with flame retardants). PFCs are also being released into the environment via factory emissions, and during house fires when treated items burn.

According to the CDC’s “Fourth National Report on Human Exposure to Environmental Chemicals”1 published in 2009, 12 different PFCs were detected in Americans, including PFOA. According to the Agency for Toxic Substances & Disease Registry (ATSDR):2

“Once in your body, perfluoroalkyls tend to remain unchanged for long periods of time. The most commonly used perfluoroalkyls (PFOA and PFOS) stay in the body for many years. It takes approximately four years for the level in the body to go down by half, even if no more is taken in.”

While there’s a dizzying array of chemical names in the PFAS groups, if an item is either non-stick, waterproof, or stain-resistant, it has some type of fluoride-impregnated coating that provides the slipperiness, and you can be virtually guaranteed it will be problematic.

Other Replacements Of Similar Concern

In 2006, the EPA launched the 2010/15 PFOA Stewardship Program,3 and companies agreed to voluntarily reduce the use of PFOA and related chemicals by 95 percent by 2010, with the aim to eliminate them by 2015.

Unfortunately, it was only a voluntary program and much of the damage has already been done, as these chemicals have been found to be extremely resistant to biodegradation. Some polyfluorinated chemicals also break down to form perfluorinated ones.

Making matters worse, the chemicals targeted for phase out are being replaced with another group of PFAS that share many of the same problems as the ones being eliminated.4

The newer, short-chain PFAS are thought to be less hazardous, but scientists warn we don’t yet know enough about them to make a solid determination about their safety. There are certainly warning signs suggesting we’re just trading one danger for another…

For example, a recent Danish study5 looking into the health effects of PFAS, including the newer short-chain versions that are replacing the older long-chained ones, found that women with higher blood levels of PFAS had a 16-fold increased risk for miscarriage.

We see the same problem happening with flame retardants, which has led a group of scientists to propose a ban on an entire class of chemicals (organohalogens) rather than tackling them one-by-one, in an effort to put an end to this “toxic whack-a-mole game” played by the chemical industry.6

As for the newer, short-chain PFAS taking over the market, Arlene Blum, a University of California chemist, and the executive director of the Green Science Policy Institute says:7

“We know thesesubstitutes are equally persistent. They don’t break down for geologic time… It’s a very serious decision to make chemicals that last that long, and putting them into consumer products with high levels of human exposure is a worrisome thing.”

In studies of heated teflon non-stick pans on conventional stovetops, commissioned by the consumer watchdog organization Environmental Working Group (EWG),8 it only took two to five minutes of heating to reach temperatures at which dangerous toxins were produced. 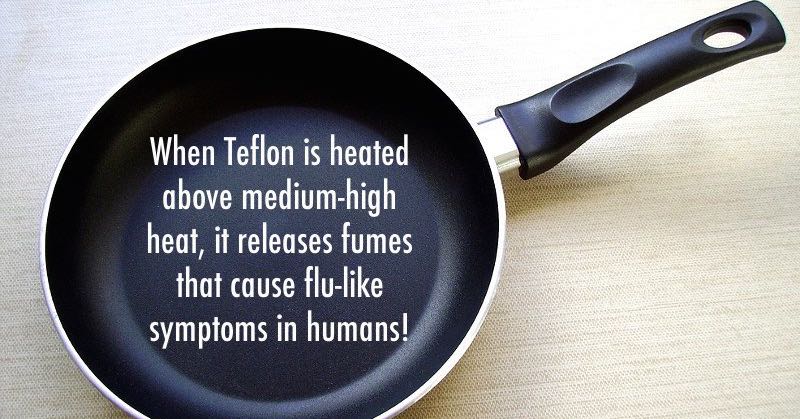 The coating begins to break down and release toxins into the air at 464 degrees Fahrenheit. When the pot or pan reaches 680 degrees F, they release at least six toxic gasses, including two carcinogens (PFOA and TFE), and monofluoroacetic acid (MFA), a chemical warfare agent that is deadly to humans even at low doses.

According to the EWG, studies conducted by DuPont’s own scientists revealed that when its non-stick cookware is heated it breaks down into 15 types of toxic gases and particles.9 For a list reviewing them all, please see EWG’s 2003 report, “Canaries in the Kitchen: DuPont Has Known for 50 Years,”10 which also notes:

“DuPont acknowledges that the fumes can also sicken people, a condition called ‘polymer fume fever.’ DuPont has never studied the incidence of the fever among users of the billions of non-stick pots and pans sold around the world. Neither has the company studied the long-term effects from the sickness, or the extent to which exposures lead to human illnesses believed erroneously to be the common flu.”

Arlene Blum (mentioned earlier) is also the lead author of the recently published Madrid Statement,11,12 signed by more than 200 scientists from 40 countries,13 which presents the scientific consensus on the harms of PFAS chemicals, old and new. For example, the Statement points out that:

Thus, a switch to short-chain and other fluorinated alternatives may not reduce the amounts of PFASs in the environment. In addition, because some of the shorter-chain PFASs are less effective, larger quantities may be needed to provide the same performance.

An editorial14 accompanying the Madrid Statement echoes the same warning, saying: “Given the fact that research raised concern about the long-chain PFASs for many years before action was taken and that global contamination and toxicity have been documented in the general population, potential risks of the short-chain PFASs should be taken into account when choosing replacements for the longer-chain compounds.”

In fact, 10 years ago, the EPA fined DuPont $16.5 million for withholding decades’ worth of information about health hazards associated with PFAS. As noted in a recent report15 by the Environmental Working Group (EWG):

“DuPont had long known that PFOA caused cancer, had poisoned drinking water in the mid-Ohio River Valley and polluted the blood of people and animals worldwide. But it never told its workers, local officials and residents, state regulators, or the EPA.” At the time, that fine was the largest the EPA had ever assessed, but it was still too small to act as a deterrent.

The Madrid Statement lists many of the documented health effects associated with the older, long-chain PFASs, including the following:16

How To Avoid These Dangerous Chemicals

The Madrid Statement17 recommends avoiding any and all products containing, or manufactured using, PFASs, noting they include products that are stain-resistant, waterproof, or teflon non-stick. More helpful tips can be found in the EWG’s Guide to Avoiding PFCS.18

Besides listing a number of sportswear brands known to use PFCs in their shoes and clothing, the Guide also notes that Apple admits the wristband of its new Apple Watch Sport model is made with PFCs. Other suggestions that will help you avoid these dangerous chemicals include avoiding:

When you spend a lot of time planning and preparing meals for yourself and for your family, you should consider cooking them in safe cookwares.

As the above article explained about teflon non-stick cookware that leach unwanted “flavors” and carcinogenic toxins (cancer-causing) into your food, imagine how dangerous it is to continue using them to the detriment of your and your family’s health.

We recommend using ceramic or porcelain non-stick cookware so that you can enjoy easy, non-stick cooking that gives you healthy, tasty results—and easy wash-up to boot!

After looking around and done a lot of reading, I chose an eco-friendly Cooksmark set of porcelain enamel cookware that has ceramic non-stick interior that is safe for high heat cooking, with no leaching of PFOA, PTFE, lead or cadmium.

The exterior material is made of aluminum for even heat distribution, cooking your food thoroughly but never burnt. Best of all, when cooking, very little oil is needed and the food will just slide off the skillets.

Below are three recommended sets of ceramic or porcelain cookwares: 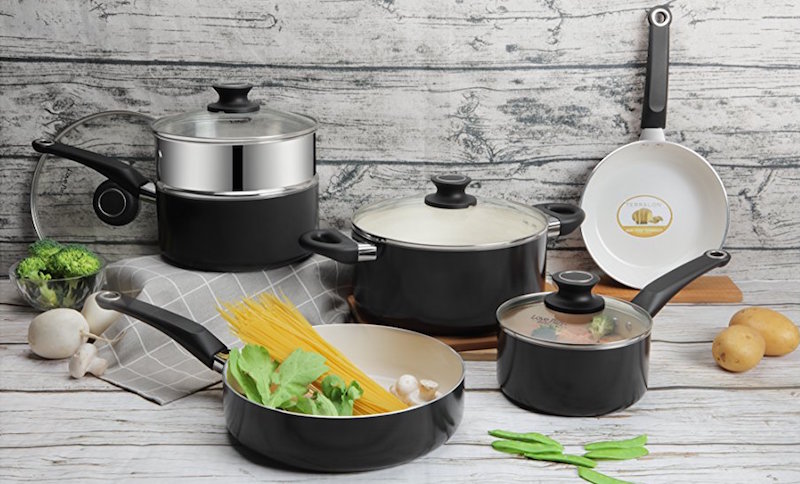 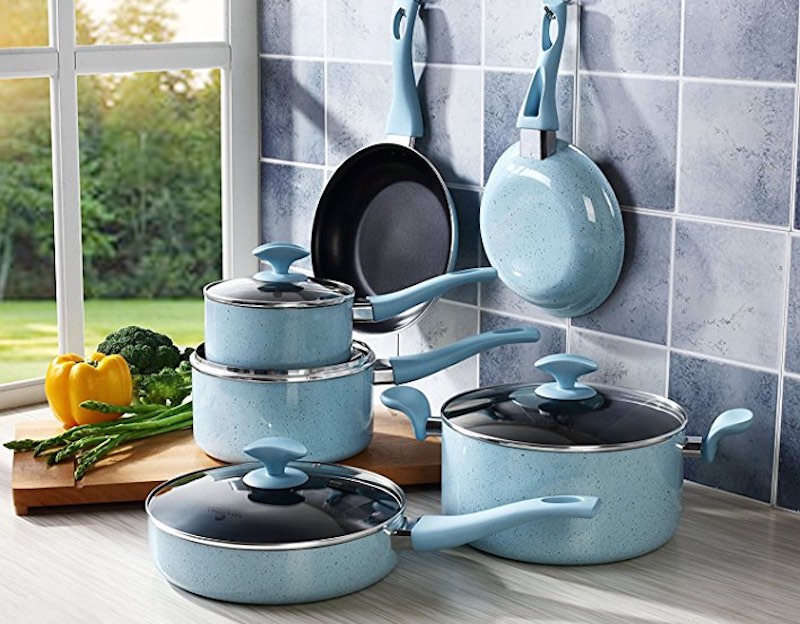 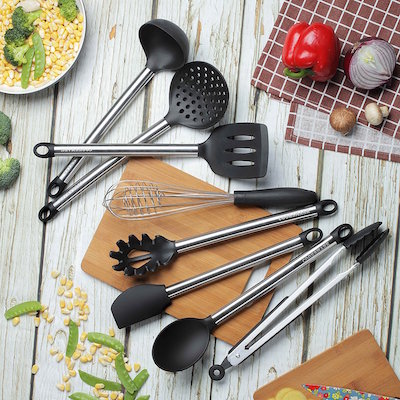 When using any ceramic cookware, opt for Cooksmark’s non-stick non-toxic, highly heat-resistant cooking utensils that won’t melt up to 480oF.

Safer for food preparation, and protects your cookware to last longer.