by: Sara Ding
in Detoxification, Do-It-Yourself

Literally “boiling stone”, zeolite is a natural mineral of volcanic origin, formed by a chemical reaction between lava and saline water. It has been used for centuries as a natural remedy for heavy metal detox thanks to its filtering properties.

There are about 40 types of natural zeolites, forming in both volcanic and sedimentary rocks and about 150 synthetic types—manufactured for industrial use, not for human consumption.

How Does Zeolite Work To Detoxify?

Zeolite Literally Traps Toxins And Escorts Them Out Of Your Body

Thanks to its negative charge and peculiar structure of porous microparticles, it can trap positively charged ions (toxins) and free radicals, and remove them from your body, acting like a molecular sieve.

The efficacy of the zeolite detox is due to the fact that the zeolite-toxin bond is nearly impossible to break. Once bonded, the heavy metals cannot be removed nor left as a deposit in other areas of the body because they get neutralized inside the zeolite’s negatively charged field.

So once trapped, the toxins are flushed out of the body by slowly passing through the small intestines, where the villi covered with zeolite purify the bloodstream.

This chelation process takes just 5-7 hours, and takes place like a normal bodily process, without impacting the kidneys or liver. 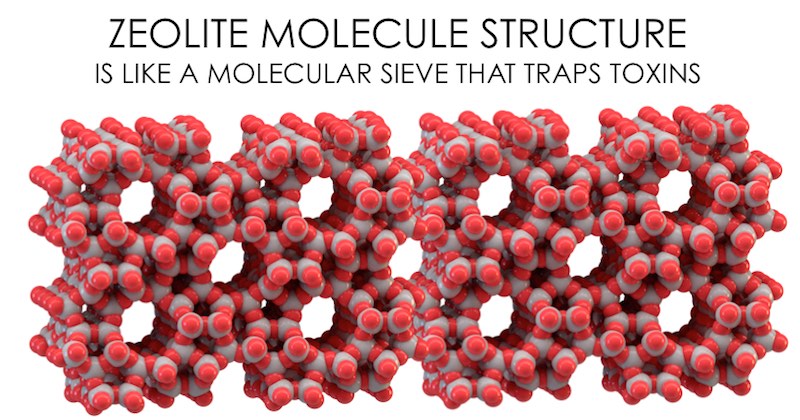 How Long Does A Whole Body Detox Take?

A full body heavy metal detox may take about 7-9 weeks or more, depending on your body size, health, lifestyle, diet and age. The detox can be quicker and more effective if there is a consistent improvement in diet and if you also do the other detox as we suggest here.

Health Benefits Of A Zeolite Detox

How To Do a Zeolite Heavy Metal Detox

Buy a 100% natural zeolite of volcanic origin marked as suitable for human intake such as Clinoptilolite. In the USA, zeolite is registered as safe for human consumption by the Food and Drug Administration (FDA). Ensure the product is certified and has no additives.

For a complete detox, add 1 teaspoon of Zeolite into a glass of water or juice and drink 3 times a day, for 7-9 weeks. Twice a day for a lighter detox.

After the initial detox period, you can carry on the detox in case of particular health issues, or continue with a maintenance dose once a day.

Zeolite can be used as an external remedy for skin problems. In the case of acne, dermatitis, eczema and psoriasis, apply the powder directly to the affected area with a wet cotton ball.

It can contrast excessive sweating and hyperhidrosis of the palms, hands, and underarms—zeolite is an ingredient in deodorants and cosmetics.

Synthetic zeolites are not to be consumed. They are used in industrial water filtration, air purification, and to remove radioactive particles and pollutants from the soil. It can be used in pet litter to remove odors.

Where can I buy zeolite?

Buy the powder, in capsules or liquid form at your local healthfood stores, or get it here.

Which is the best zeolite?

The best zeolite for human intake is naturally‐occurring, activated clinoptilolite, with no additives and synthetic substances. You can buy it here.

Are there any contraindications from using zeolite?

Zeolite has no known side effects. It is non-toxic and remains in the intestines—it cannot be absorbed into the body from the gastrointestinal tract. Though rare, you may experience headaches and nausea caused by the detox effect on the body. Drink plenty of water to avoid constipation and dehydration.

It has been proven to be harmless for people to take as a detox supplement.
It goes through the body’s natural elimination channels in a safe manner without removing beneficial minerals such as your electrolytes.