10 Nail Symptoms And What They Mean For Your Health

Nails are often regarded as a purely aesthetic feature, and the $768 million spent annually on nail polish (in the U.S. alone) can attest to that.1 Yet, your nails are far more than a platform for bright colors and nail art.

The shape, texture, and color of your natural nails act as a window into your body, and while some nail symptoms are harmless, others can be indicative of chronic diseases, including cancer. As noted by the American Academy of Dermatology (AAD):2

“Nails often reflect our general state of health. Changes in the nail, such as discoloration or thickening, can signal health problems including liver and kidney diseases, heart and lung conditions, anemia, and diabetes.” 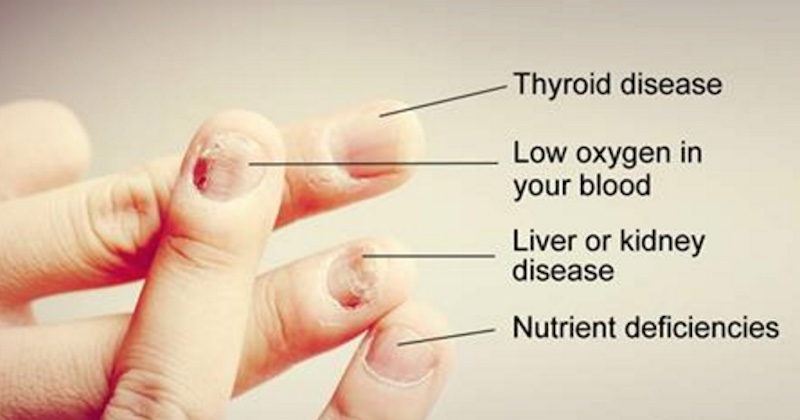 Even the growth rate of your nails may give clues about your underlying health. Healthy nails grow, on average 3.5 millimeters (mm) a month, but this is influenced by your nutritional status, medications, trauma, chronic disease, and the aging process itself.3

If you noticed any significant changes in your nails, including swelling, discoloration, or changes in shape or thickness, see a dermatologist right away. It could be nothing, or it could be due to an underlying condition (for instance, nail problems are more common in people with diabetes).

Below are 10 nail symptoms you might experience in your lifetime and what they mean for your health.

10 Nail Symptoms And What They Mean for Your Health 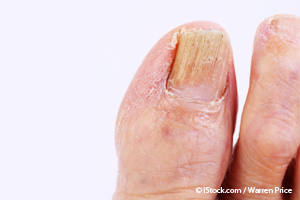 Your nails may yellow with age or due to the use of acrylic nails or nail polish. Smoking can also stain nails a yellowish hue.

If your nails are thick, crumbly, and yellow, a fungal infection could be to blame.

Less often, yellow nails may be related to thyroid disease, diabetes, psoriasis, or respiratory disease (such as chronic bronchitis).

Lifestyle factors may play a role here, such as if you have your hands in water a lot (washing dishes, swimming, etc.), use nail polish remover frequently, are exposed to chemicals (such as cleaning products) often, or live in a region with low humidity.

Cracking and splitting can also be caused by a fungal infection or thyroid disease, particularly hypothyroidism. Brittle nails may also be due to a deficiency in vitamins A and C or the B vitamin biotin. 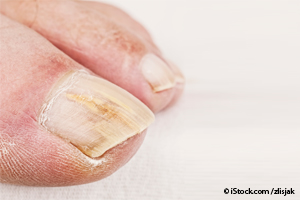 Clubbing describes when your fingertips become enlarged and the nail becomes curved downward. It can be a sign of low oxygen in your blood and is associated with lung disease.

Small white spots on your nails are usually the result of nail trauma. They’re not cause for concern and will fade or grow out on their own.

Less commonly, white spots that do not go away could be due to a fungal infection.

Horizontal ridges may also be due to trauma or a serious illness with a high fever (such as from scarlet fever or pneumonia).

John Anthony, M.D., a dermatologist at the Cleveland Clinic in Ohio, explained them this way to TIME:

“This is typically the result of direct trauma to the nail or a more serious illness, in which case you’ll see it on more than one nail at a time … Your body is literally saying, ‘I’ve got better things to do than make nails’ and pauses their growth.”

Horizontal ridges, also known as Beau’s lines, may also be due to psoriasis, uncontrolled diabetes, circulatory disease, or severe zinc deficiency. Another type of horizontal line is known as Mees’ lines, which are horizontal discolorations that may be due to arsenic poisoning, Hodgkin’s disease, malaria, leprosy, or carbon monoxide poisoning.

Vertical ridges are typically a normal sign of aging and are not a cause for concern. They may become more prominent as you get older.

In some cases, nail ridges may be due to nutrient deficiencies, including vitamin B12 and magnesium.

Nails that curve upward at the edges, taking on a spoon-like appearance, may be a sign of iron-deficiency anemia, hemochromatosis (excess iron absorption), heart disease, or hypothyroidism.

If your nails have multiple pits or dents, it’s often a sign of psoriasis.

Nail pitting may also be due to connective tissue disorders (including Reiter’s syndrome) or alopecia areata, an autoimmune disease that causes hair loss.

Black streaks or painful growths on your nail warrant an immediate trip to your physician, as they may be due to melanoma, the deadliest form of skin cancer.

10. White Nails with a Strip of Pink 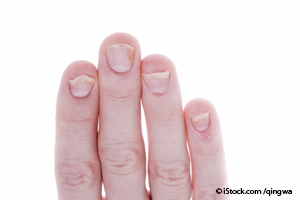 If your nails are mostly white with a narrow pink strip at the top, known as Terry’s nails, it could be a sign of liver disease, congestive heart failure, kidney failure, or diabetes. Sometimes Terry’s nails may also be due to aging.

Do You Bite Your Nails? It Could Lead to Infection

Most nail symptoms are due to systemic issues, trauma, or lifestyle factors, and this includes the habit of nail biting. Nail biters are susceptible to paronychia, a skin infection that occurs around your nails.

As you chew your nails, bacteria, yeast, and other microorganisms can enter through tiny tears or abrasions, leading to swelling, redness, and pus around your nail.

This painful condition may have to be drained surgically. Bacterial infections caused by nail biting are actually one of the most common nail problems, according to the American Academy of Dermatology (AAD).4

Nail-biting tends to begin in childhood, peak in adolescence, and then slowly (or abruptly), decline with age. Whether you’re an adult who can’t seem to kick the habit, or a parent of a child or teen who bites his or her nails, here are simple options that are often effective for quitting:

If you eat a balanced, whole-food diet like the one described in my nutrition plan, you’re probably giving your body more-than-adequate amounts of the vitamins and minerals it needs to function.

If not (and this applies to the majority of the U.S. population), there’s a good chance your body is lacking in important nutrients. Not only can this lead to chronic diseases, but your nail (and hair and skin) health will also suffer.

Healthy sources of protein, like whey protein, free-range eggs, and grass-fed meat, are important (grass-fed beef is also a good source of zinc, which is necessary for making proteins like those found in your nails).

Antioxidants, vitamins, and minerals found in leafy greens, berries, and other whole foods will also benefit your nail health. Biotin, vitamin B7, are examples.

Your body needs biotin for metabolizing fats, carbohydrates, and amino acids, but it’s most well known for its role in strengthening your hair and nails.

Biotin may play a role in building keratin, which makes up your nails. Egg yolks from organic, free-range eggs are one of the best sources of biotin. Animal-based omega-3 fats are also important.

Most Americans eat too many inflammatory omega-6 fats (think vegetables oils) and too few anti-inflammatory omega-3s, setting the stage for health problems like depression, heart disease, rheumatoid arthritis, and diabetes, just to name a few. Inflammation may also interfere with nail development.

The ideal ratio of omega-3 to omega-6 fats is 1:1, but the typical Western diet is between 1:20 and 1:50. Brittle or soft nails are a common signs that your omega-3 to omega-6 ratio may be out of balance. Try cutting back on vegetable oils and eating more animal-based omega-3s from krill oil, sardines, or anchovies.

Cotton-lined rubber gloves are useful when doing dishes, for example, and minimize (or eliminate) your use of nail polish, polish remover, and artificial nails.

Simple buffing can create a nice, smooth sheen to your nails, without using any nail polish whatsoever. An added boon is that it may actually help your nails grow stronger and longer due to increased circulation, and you won’t have to worry about chipped nail polish either.

It’s a good idea to keep your nails trimmed relatively short using manicure scissors or clippers. Trim them straight across and rounded slightly in at the center, which will help keep your nails strong, according to AAD.6 Your nails can also benefit from added moisturizer (much like your skin), so consider rubbing some coconut oil onto your nails regularly. Also, avoid picking at your cuticles, as this can damage your nail bed, and hangnails should be clipped, not ripped off, to avoid harming live tissue.7

Finally, if you noticed any unusual or bothersome nail symptoms, resist the urge to simply cover them up with artificial nails or manicures and pedicures. Instead, see a holistic health care provider who can help you figure out if there’s an underlying issue.