Heart disease is more than a serious health issue, it is the number-one cause of death in both women and men: roughly 600,000 people die of heart disease in the U.S. every year. But because women have longer life expectancy than men, they constitute a larger proportion of the elderly population in which the likelihood of cardiovascular disease is greatest. 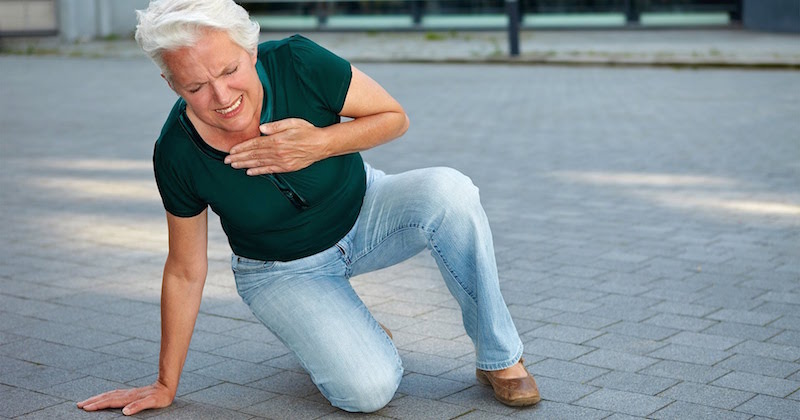 For the past three decades, there have been significant declines in heart disease mortality for both men and women, especially in the older population. However, recent data suggests a lack of improvement in heart disease rates in women age 55 and younger.

Read on to find out more about heart disease and heart attacks in women, and build your awareness of gender differences in diagnosis treatment.

Coronary artery disease (CAD), which can lead to heart attacks, is the most common type of heart disease.1 A heart attack occurs when the blood and oxygen supply to the heart muscle is partially or completely compromised, usually due to cholesterol plaque buildup in the blood vessels.

Symptoms Of Heart Attacks In Women

In women, heart attacks cause one in three deaths each year; approximately one woman dies from a heart attack every minute.

Although both men and women get heart attacks that are caused by obstruction of the heart arteries by plaque and clots, the way these clots develop differs.

Women tend to have plaque erosion, which means small pieces of plaque break off and become exposed. This causes the formation of smaller clots, which may not cause complete blockage (or “occlusion”) at once. (This explains the more subtle symptoms than for men.) In addition, women tend to experience heart attacks approximately 10 years later than men, when they are more fragile and likely to have other health issues.

One of the reasons women typically have heart attacks later than men is due to the decrease in estrogen that accompanies menopause. The cause of heart attacks and the warning symptoms that lead patients to seek immediate medical attention are different in women and men, too. Women who do not recognize these differences may experience delayed and inappropriate diagnosis and treatment. 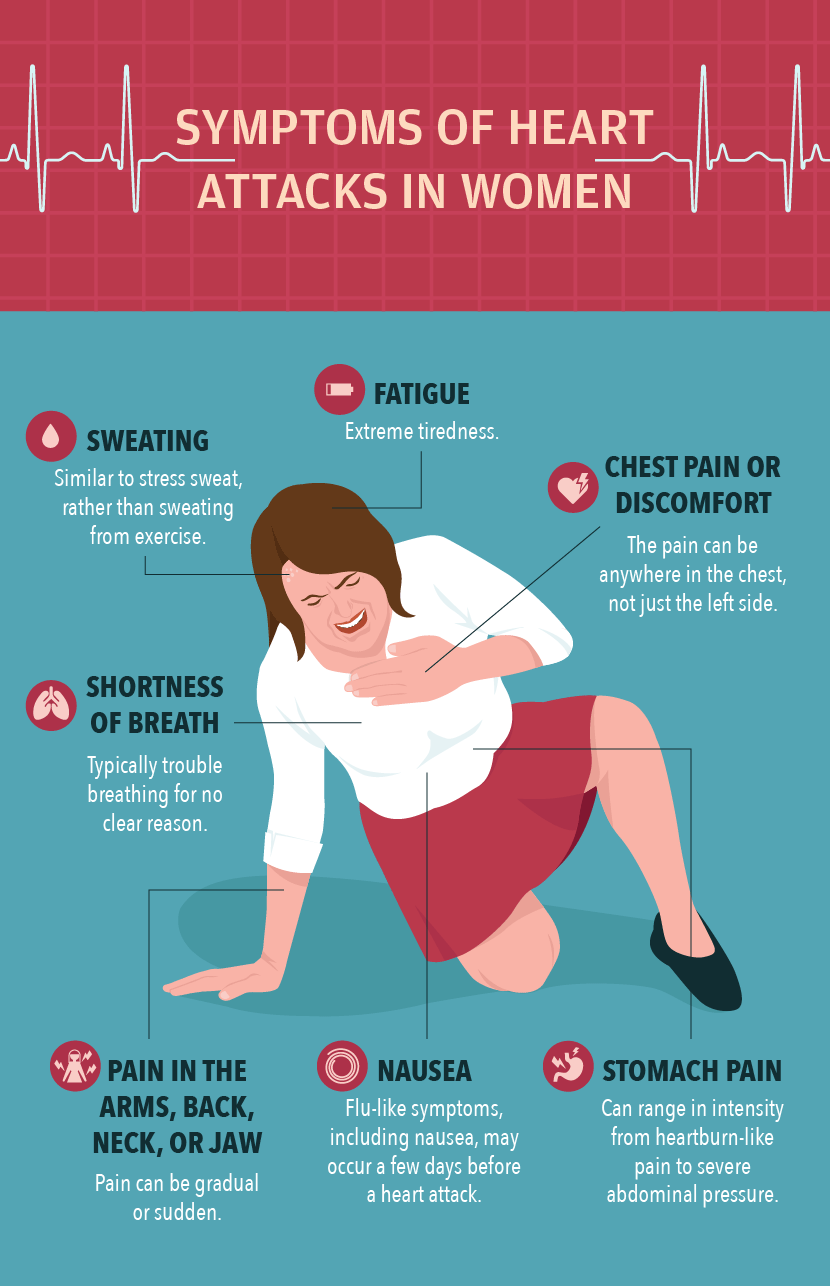 Compared to men, women with heart attacks tend to report symptoms such as chest pressure, heaviness or fullness, and sweating less frequently. Women often attribute these symptoms to other less life-threatening conditions, including indigestion, muscle pain, and normal aging.

Women are more likely to describe symptoms such as shortness of breath; arm, back, or jaw pain; nausea; heart pounding; lightheadedness; or loss of appetite. This presentation in women has been linked to the delay in both diagnosis and the delivery of life-saving treatment strategies.23

Risk Factors for Heart Disease:
The Difference between Women and Men

Estrogen helps maintain a normal blood pressure in women before menopause. But after menopause, women develop high blood pressure more than men: only 44 percent achieve control of their blood pressure, compared to 51 percent in men.4

Women who smoke are 25 percent more likely to experience heart events than men who smoke. Additionally, the combination of smoking and oral contraceptive use increases heart disease risk.6

Elevated blood sugar (known as diabetes mellitus) has a greater impact in women than men. In fact, for a young woman with diabetes, the risk of heart disease is four to five times higher than it would be for a man of the same age. Prediabetic women have earlier vascular and metabolic damage than prediabetic men, as well.7

Obstructive sleep apnea (OSA) is a potentially serious sleep disorder in which breathing repeatedly stops and starts during sleep. It can decrease oxygen supply to all the organs, but the heart is particularly susceptible to these drops and the subsequent damage.

Common symptoms are daytime sleepiness or fatigue, restlessness during sleep, and snoring. Women with OSA have been shown to have higher inflammatory markers, more depression, and greater difficulty controlling blood pressure than men with the same condition.8

When it comes to heart health, obesity has a more significant impact on women than men. Obesity increases the relative risk of heart disease by 64 percent in women, as opposed to 46 percent for men.9

There is an inverse relationship between physical activity and heart disease and longevity. According to data from a 2011 National Health Interview Survey (NHIS) in adults, inactivity was higher among women than men (33.2 percent versus 29.9 percent).10

Besides the traditional risk factors mentioned above, there are risk factors exclusive to women, such as pregnancy-related complications and hormonal factors. Other conditions tied to the development of heart disease, including depression, anxiety, autoimmune diseases (lupus and rheumatoid arthritis), and migraines, are significantly more frequent in women.11 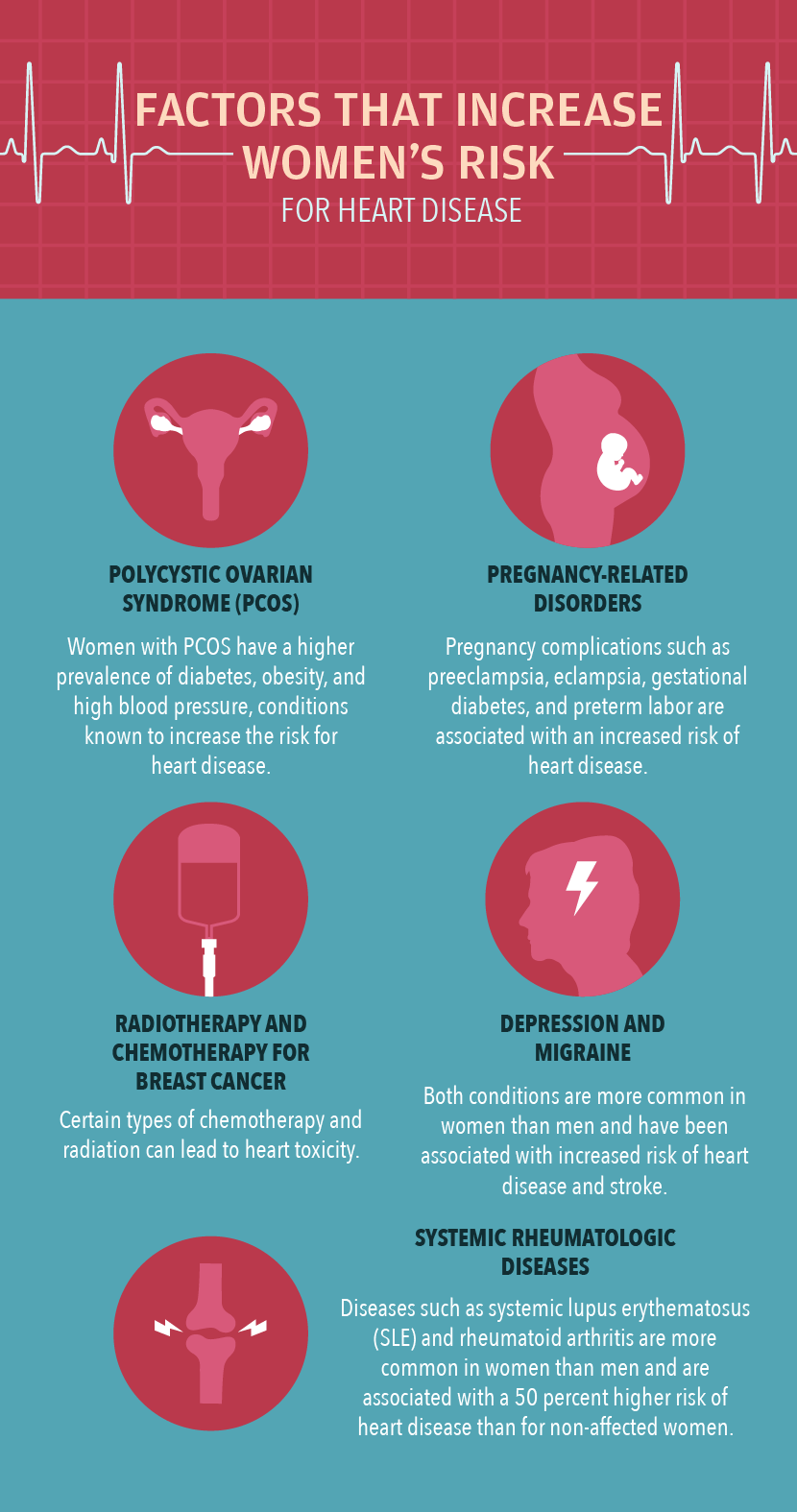 PCOS is a condition in which a woman’s hormones are out of balance. It can cause problems with menstruation and make it difficult to get pregnant. Women with PCOS have a higher prevalence of diabetes, obesity, and high blood pressure.

There is a known relationship between these conditions and heart disease. In addition, women with PCOS have higher levels of calcium in the heart arteries, which increases the risk of heart attacks.12

Pregnancy is considered a stress test. When a woman fails this stress test, complications such as preeclampsia, eclampsia, gestational diabetes, and preterm delivery (birth before 37 weeks) can develop. These complications are associated with an increased risk of heart disease (a risk that persists later in life, far beyond the affected pregnancy period).

Diseases such as systemic lupus erythematosus (SLE) and rheumatoid arthritis are more common in women than men and are associated with a 50 percent higher risk of heart disease than for non-affected women.15,16 Additionally, the use of corticosteroids as a treatment for these conditions increases the incidence of inflammation in blood vessel walls.17

Radiotherapy And Chemotherapy for Breast Cancer

There has been tremendous improvement in the survival rates of breast cancer. Unfortunately, this improvement in outcomes also increases the prevalence of chemotherapy—and radiotherapy-associated heart toxicity.

Patients with breast cancer who have undergone certain types of chemotherapy and have had radiation to their chests should be monitored for cardiac conditions over the long-term.

Both conditions are more common in women than men and have been associated with increased risk of heart disease and stroke. One study showed that moderate to severe depression doubles the risk of heart attack in the next two years and increases the risk of death.

As such, the American Heart Association (AHA) recommends that every woman be screened and treated for depression. Migraines, especially with aura (symptoms you notice shortly before the headache begins), have been associated with elevated cholesterol, marked inactivity, depression, sleep disturbances, and heart attacks.18

How Treatment Varies Between Men And Women

Despite the beneficial effects of certain medicines or increased accuracy of diagnostic methods for heart disease, both of those have been found to be delayed in women.

Although heart disease is the leading cause of death in women in the U.S., risk factors including obesity, lack of exercise, high blood pressure, blood sugar, and cholesterol continue to rise in young women.

Being aware of female-specific risks and the symptoms of heart disease factors can help women prevent and recognize heart attacks. Women need to not only be aware of treatment options after a heart attack, but also become assertive about asking their doctor about those treatments and referrals.