Early Signs Of Male-Specific Cancer Every Man Should Know About

In the United States, cancer is the second leading cause of death in men, accounting for 22.8% of all cases (according to the 2015 data from the Centers of Disease Control & Prevention, that’s the most recent credible listing).

That’s hundreds of thousands of cancer deaths yearly, and there are two effective ways of fixing this dreadful situation: 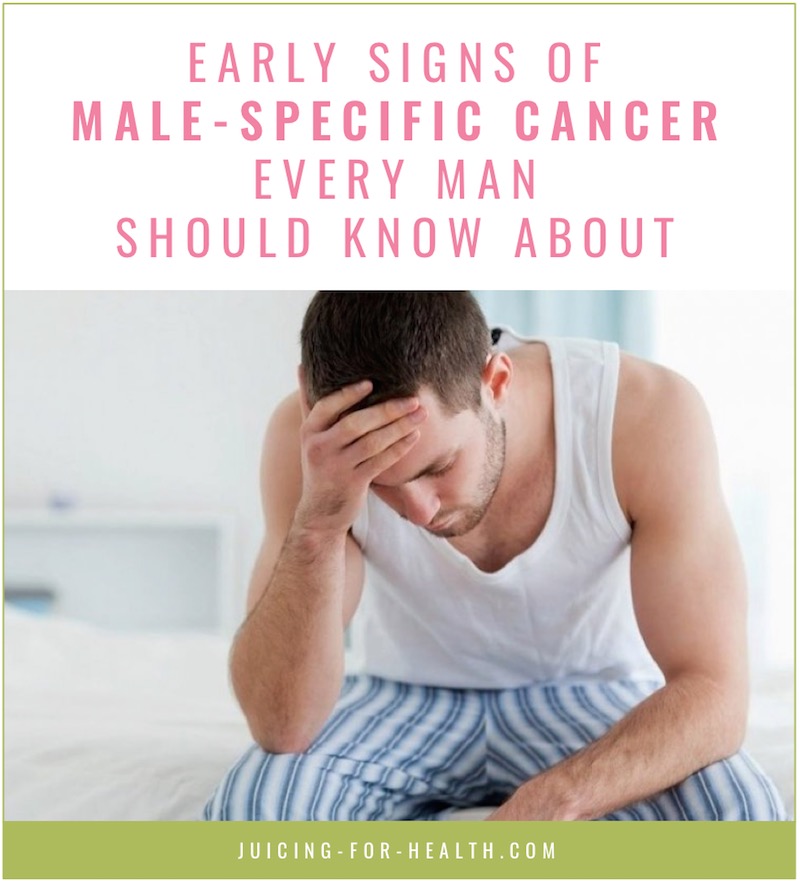 How ”drastically” are we talking about? Here are some inspiring numbers from the Cancer Research UK organization:

Now that you know the importance of early cancer diagnosis, let’s take a look at the most common types of cancer in men—and their early symptoms!

According to the World Cancer Research Fund, here are the 10 most common types of cancer in men worldwide:

Two other male-specific cancer types were found to be relatively rare (testicular cancer made up just 0.8% of all cancer cases and penis cancer accounted for 0.4%) but we will still discuss their unique early symptoms too, just in case.

These 10 types of cancer above account for 74.2% of all cancer cases in men, so knowing their early symptoms will be extremely beneficial for any man out there.

Early Signs Of Cancer In Men

This is one of the most general symptoms out there, and it’s by no means cancer-specific. Exhaustion and lethargy could mean anything from a bad week at work to a chronic disease progressing slowly.

In some cases, however, generalized exhaustion is one of the first symptoms of any kind of cancer—so make sure to talk it through with your physician if the fatigue persists for more than a week or so.

As a rule, weight loss is perceived as something healthy in the Western world, but there is one case when weight loss is enough to sound the alarms for cancer.

According to studies, when you lose more than 5% of your body weight over the course of the last 6-12 months without actively pursuing this goal, this could be an early cancer symptom, especially for colorectal cancer (ranked top 3 in the list above).

Keep in mind that other cancer types may also be presented with this symptom.

3. Visible Blood In The Urine

Scientifically known as hematuria, visible blood in the urine is a common symptom of bladder cancer (ranked top 6 in the list above).

Studies indicate that the risk of bladder cancer in case of visible blood in the urine is about 12% so it won’t be wise to panic just yet—but scheduling a visit for a full urologic workup is absolutely required.

In rare cases, hematuria may indicate prostate cancer as well.

In 3% of cases, impotence may be an early symptom of prostate cancer, along with urinary changes. Keep in mind that this type of cancer is currently most common in men aged 65 and older, and quite rare before age 40.

An occasional upset stomach happens with everyone every once in a while, and so does constipation or bloating.

However, dealing with such changes frequently over the course of 6 weeks is enough reason for a detailed consultation with a good physician, especially if you’re over 60, as this could be another early symptom of colorectal cancer.

7. Rectal Bleeding And/Or Blood In The Stool

Although this symptom sounds like the most dangerous and scary in this list, it’s actually a really weak cancer predictor: less than 3% of people reporting rectal bleeding in the previous year will be diagnosed with cancer.

Testicular cancer is quite rare in the general male population (just 0.8%), but it’s also the most common cancer among men aged 18-50 years.

Fortunately, this form of cancer is easily diagnosed in its early stages through testicular self-examination—and it can be cured in 96% of cases if discovered early.

It’s highly recommended for every man in this age group (18-50 years) to learn the correct technique of testicular self-examination (here’s a good source) and perform it every month.

In case of any lumps or changes, it’s essential to contact a good doctor immediately.

Although lung cancer remains the most common type of cancer in men, it’s very hard to diagnose early.

Besides unintentional weight loss and persistent exhaustion, some of its earliest symptoms include a persistent cough, wheezing, and shortness of breath (especially in non-smokers).

None of the symptoms above is specific for lung cancer itself (after all, it may be just a case of bad bronchitis, right?), but it’s still wise to check yourself and be in the safe zone.

Cancer still remains a major health problem worldwide, and while scientists and doctors all around the world do their best to improve the effectiveness of cancer treatment, we can all contribute to the fight from another angle: enforce early cancer detection.

By learning the early symptoms described above and paying close attention to any changes in your health or the health of your loved ones, you will be one step ahead of the risks.

So stay alert, stay positive, and let’s make the world a healthier place together! 🙂