Tiny Difference Between A1 and A2 Milk, But HUGE Impact On Your Health

Did you know that not all milk is equally healthy for you? And it’s not even a matter of lactose intolerance, by the way.

As the latest studies suggest, the health impact of the milk you drink depends a lot on the breed of cow that produced the milk.

Specifically, the two types of milk you should be aware of are A1 and A2 milk, as the latter option (A2) seems to be much better for the human body.

Let’s understand more about the type or breed of cows that produce not only healthy milk, but milk that seems to be able to reverse health conditions! 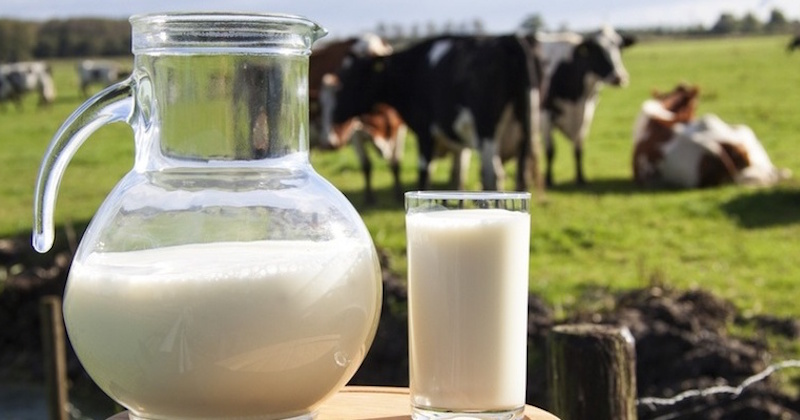 Milk Composition: What Is Milk Made Up Of?

According to the USDA food composition database, cow milk consists of about:

So, there are about 3 grams of protein in each 100 g (about 3 ounces) of milk you drink. About 80% of this protein is casein, the primary milk protein.

The catch here is that casein comes in several different forms, the most important of which are A1 and A2 beta-casein.

This may sound like no big deal, but milk rich in A1 casein seems to be much quite detrimental to human health compared to its A2 counterpart.

Difference Between A1 And A2 Milk

However, this microscopic difference has huge consequences in the long run.

The human body’s digestive enzymes process A1 and A2 beta-casein differently. When A1 casein is processed, a substance known as beta-casomorphin-7 (BCM-7) is formed. The digestion of A2 casein doesn’t form this compound.

Proteins in bovine milk are a common source of bioactive peptides that inhibit some enzyme activities. The term “opioid” is used for substances having morphine-like activity that act by binding to opioid receptors.

Opioid substances are found in the center nervous system and the gastrointestinal tract. These peptides play a crucial role in the response to pain and stress.

Epidemiological evidence has indicated that consumption of milk containing the A1 variant is linked to increased risk  of developing cardiovascular disease, type 1 diabetes, sudden infant death syndrome, autism and schizophrenia.

BCM-7 was found in milk, cheese, yogurt and some biological samples such as infant’s blood, urine from autistic children and human milk.

Cows That Produce A1 Milk

The worst thing about this whole story is that whether a cow produces milk with A1 or A2 casein depends purely on the cow’s species.

Cows And Other Animals That Produce A2 Milk

In other words, it has nothing to do with pollution, toxins, antibiotics used in the breeding process, or anything else. It’s just some types of cow make A1 casein, and some cows produce the A2 type. Although those factors are also worrisome.

What’s So Bad About A1 Milk?

Typical milk in the U.S. has a mix of A1 and A2 beta casein.

When previously we believed that cow’s milk was so bad for human health, due to the hormone growth and antibiotics injected into the animal. Now we know that the source of harm is really deeper than that! It’s because they are cows that produce A1 milk!

1. A1 milk may increase the risk of diabetes

Statistical studies have reported that type 1 diabetes is relatively rare in those populations where A2 is the main type of milk, like in African tribes who drink milk from Zebu cows.

Some other studies reported that BCM-7, the compound that’s produced during the digestion of A1 milk, is able to suppress the immune system, and this could be a contributing factor to the increased diabetes risk. This idea has been confirmed in studies on mice, but data in humans is limited.

2. A1 milk may cause, or worsen milk intolerance

Here are some good news for the lactose-intolerant folks: maybe A1 beta-casein is the real culprit, not lactose.

In other words, it seems that the matter of milk intolerance isn’t as straightforward as we thought.

Yes, in many people it’s all about lactose, but then why some poor fellows suffer from abdominal pain and bloating even drinking lactose-free milk? There is a good chance that A1 beta-casein could be the substance to blame.

I know of Asian families who after moving to the U.S. were charmed with the abundance of milk and dairy products and began to include these in their daily diet.

A1 milk may contribute to digestive inflammatory disorders such as IBS, Crohn’s, ulcerative colitis, leaky gut, allergies, eczema and autoimmune diseases. Being overweight is another result of consuming A1 dairy products.

4. A1 milk may contribute to heart disease and cardiovascular death

Preliminary data points out that A1 milk consumption is linked to a higher incidence of ischemic heart disease (IHD) and death from the condition. For example, a 2001 study reported that about 86% of deaths from IHD could have something to do with A1 beta-casein consumption.

So, it doesn’t mean that drinking A1 milk will destroy your heart, but there seems to be a correlation between the consumption of this protein and IHD mortality at the population scale.

Some animal studies reported that rabbits fed with A1 beta-casein developed more prominent atherosclerosis than animals fed with A2 beta-casein.

5. A1 milk may contribute to sudden infant death syndrome (SIDS)

Also known as crib death, sudden infant death syndrome (SIDS) is defined as the death of an apparently healthy baby during his or her first year of life, usually during sleep.

In developed countries, SIDS is one of the 5 most common causes of infant death.

Although this dreadful condition is still shrouded in mystery and we don’t know exactly what causes it, we know that sleep apnea is considered to be one of the main risk factors.

A 2011 study reported that a high level of BCM-7 (the peptide that’s produced from A1 milk) is found in some babies with sleep apnea. Although more studies are needed to confirm the link, some scientists believe that BCM-7 could suppress the respiratory center in the infant’s brain, leading to apnea and, in some cases, death.

As you see, there’s quite a growing concern regarding A1 milk and how it could impact human health. But what’s the alternative? The short answer: A2 milk.

What’s So Good About A2 Milk?

One of the biggest benefits of drinking A2 milk is because it helps to reduce inflammation.

2. A2 milk is suitable for people with lactose intolerance

If you think you are lactose intolerant, most likely it is because you have been drinking the wrong milk!

A1 milk simply can cause inflammation in your digestive system and other health issues.

In 2016, a study reported that drinking A2 milk wasn’t linked to higher post-dairy discomfort symptoms—and this was true both for lactose-tolerant AND lactose-intolerant people.

3. A2 milk supports a healthy digestive and immune system

A2 milk also contains powerful anti-inflammatory molecules called oligosaccharides that act as prebiotics in the gastrointestines. Some of the benefits, as a result, include:

4. A2 milk has more bioavailable nutrients that feed the body

As mentioned above, a human mother’s breast milk is A2 milk. Likewise, milk from A2 cows and goat have molecule and chemical compositions that are easily assimilated in the human body.

Where A1 milk may cause excessive mucus and asthma in young children, A2 milk can actually reverse this condition.

Due to the better absorbability of A2 milk, the rich nutrients are more easily digested and used by the body. This is important as drinking A2 milk helps to eliminate nutritional deficiencies, thus treating many ailments caused by deficiencies.

For example, drinking A1 milk may cause osteoporosis due to its imbalanced calcium-magnesium ratio that results in calcium deficiency. You are not faced with this issue when consuming A2 milk.

Nutrients bioavailability means that your bones are able to absorb and use more of the calcium for better bone-building, minus the inflammation.

Where Can You Find A2 Milk?

Where can you find the A2 milk that seems to be safer, in fact healthier, to drink?

Unless you live in France, some Asian countries, and Africa, most of the milk products you see all around contain A1 and A2 beta-casein in equal amounts.

At the time being, the only company that produces and sells A2 milk is ”The a2 Milk Company”. Their products are sold mostly in the US, UK, New Zealand, Australia, and China.

More countries and companies are expected to embrace this trend in the near future.

On the other hand, there is another way out—goat milk. Goat milk contains only the A2 protein, which is why goat milk is so widely promoted as the anti-inflammatory milk.

If there is no A2 milk in your country or area, it wouldn’t be wise to waste a fortune trying to get it somehow. Don’t think of this matter as a life or death kind of problem.

However, if you have easy access to A2 milk—consider trying it out. Many people report feeling better after drinking A2 milk compared to A1 milk, especially if they suffer from dairy intolerance, and A2 generally seems to be healthier in all aspects.