25 Types Of Nutritious Citrus Fruits. How Many Have You Tried?

From our ancestral days, there were only three core citrus species: the mandarin orange, pomelo and citron. Today, there are hundreds of types of citrus fruits that are products of hybridization from these three original species. 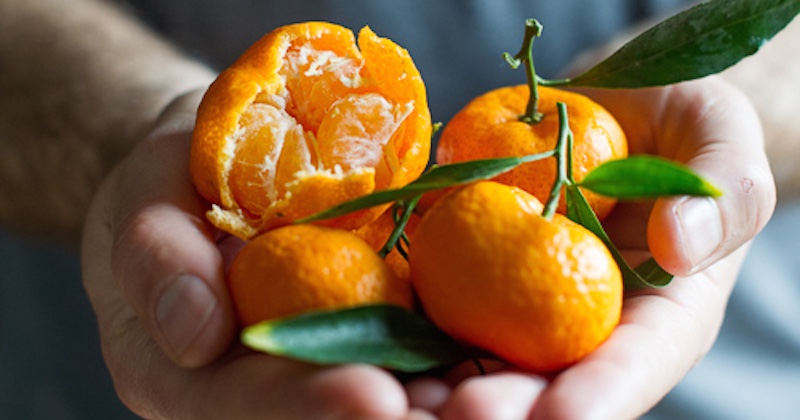 A mandarin orange (citrus reticulata) fruit size is about 4 to 8 cm (1.6 to 3.1 in) in diameter. The shape is spherical or oblate, with a thin skin that is easy to peel. The taste is often sweet, making it a very popular fruit.

In Traditional Chinese Medicine (TCM), the dried peel of the fruit is used in the regulation of qi (energy). It is also used to treat abdominal distension, enhance digestion and reduce phlegm.

During the Chinese New Year celebration, mandarin oranges are often presented as gifts to friends and relatives, as they represent traditional symbols of abundance and good fortune. 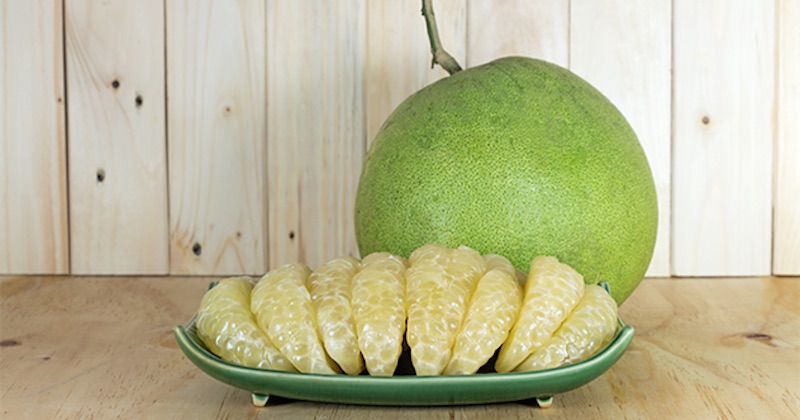 The pomelo (citrus maxima or citrus grandis) is the largest among the citrus fruits, measuring about 15 to 25 cm (5.9 to 9.8 in) in diameter and weighing between 1 and 2 kg.

The skin of the fruit is typically pale green to yellow when ripe, with a very thick albedo (rind pith). The fruit is white to pinkish, tastes sweet and bitter, almost like the grapefruit but without the tartness.

Studies show that the extract from pomelo skin can help resolve metabolic disorders. 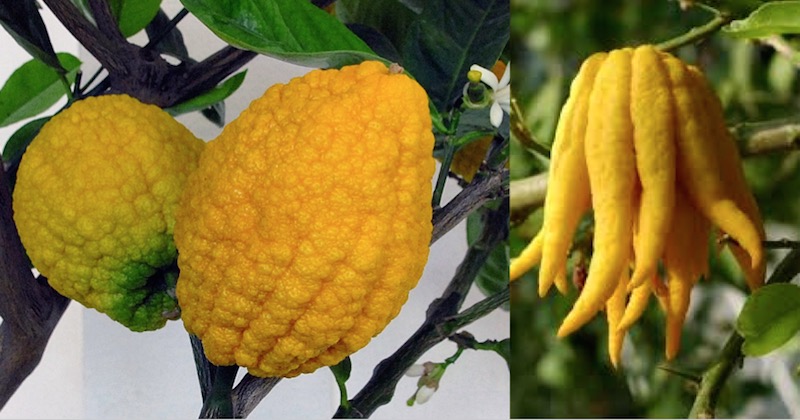 The citron (citrus medica) is a large fragrant citrus fruit with a thick wart-like bumps rind. It is one of the core citrus fruit species from which all other citrus types developed through natural hybrid or artificial hybridization.

The citron fruit is usually ovate or oblong with rind as thick as the pulp inside. There is also a fingered citron variety called “Buddha’s hand”.

From ancient through medieval times, the citron was used for many medicinal purposes: to fight seasickness, pulmonary conditions, intestinal ailments, as an antidote to poison, for treating nausea, vomiting and excessive thirst.

In Ayurveda, citron juice is used as an anti-parasite, appetizer, to treat rheumatism, flatulence, hemorrhoids, skin diseases and weak eyesight.

There are hundreds of orange hybrids and the following lists only the most common ones:

Sweet orange (citrus x sinensis) is a hybrid between a pomelo and a mandarin orange. Sweet orange is simply the common orange but is referred to as “sweet” to distinguish it from the bitter orange.

Sweet oranges account for two-thirds of all citrus fruits cultivated, and the majority of them are used for juice extraction.

Read more about the full health benefits of the common orange.

Bitter orange (citrus x aurantium), or marmalade orange, is used for its essential oil and is found in perfume, or used as a flavoring.

Bitter orange is often used in herbal medicine as a stimulant and appetite suppressant, due to its active ingredient synephrine.

The Seville variety is a particularly tart orange with thick, dimpled skin, which is often used for making marmalade and orange-flavored liqueurs. 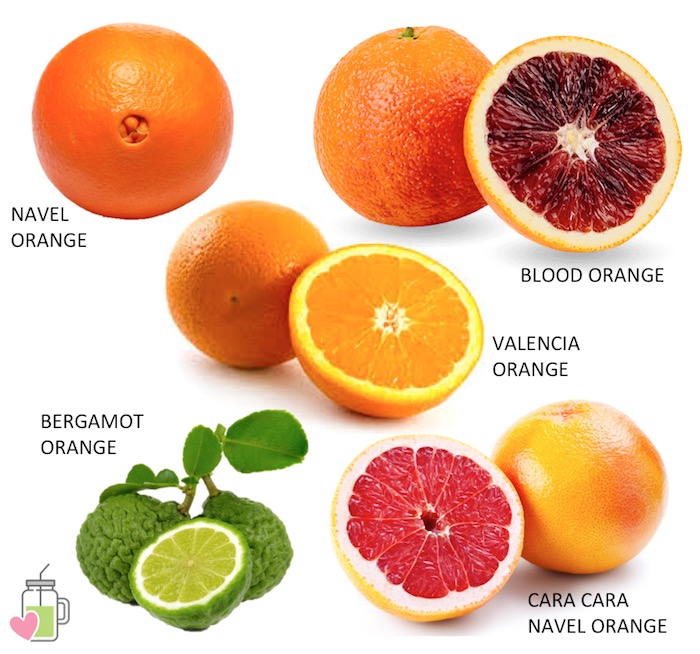 Blood orange (citrus x sinensis) is probably a hybrid between a pomelo and the tangerine. It has a distinctive crimson, almost blood-colored flesh, due to the presence of anthocyanins, an antioxidant that is uncommon in citrus fruits.

Blood oranges have a unique flavor compared to other oranges. Depending on the variety, the taste can be tart or sweet. It can be used to make marmalade, sorbet or added into salad.

Navel oranges are characterized by the growth of a second fruit (its undeveloped twin), which protrudes slightly and resembles a human navel.

They have thicker skin and are less juicy, rendering them less suitable for juicing.

The cara cara navel are a type of navel orange that was discovered at the Hacienda Caracara, hence its name. It is believed to have developed as a cross between the Washington navel and the Brazilian Bahia navel.

The fruit is seedless, sweet and low in acid with very little pith under the skin. The flesh is distinctively pinkish red, thus it’s also called the “red navel”.

The Bergamot orange (citrus bergamia) is about the size of a common orange, but green or yellow in color depending on its stage of ripeness.

Genetic research found Bergamot orange to be a probable hybrid of lemon and bitter orange. It has a unique acidic taste with vaguely bitter nuances.

Its fragrant essential oil is extracted from the peel and used to flavor food, scent perfumes and cosmetics.

The Valencia orange was first discovered in Valencia, Spain, thus its given name. It was made popular by the American orange industry, so much so that it was even one of the driving forces behind naming Orange County, CA.

The Valencia orange is sweet, primarily grown for orange juice production. The fruit averages 6.9 to 7.6 cm (2.7 to 3 in) in diameter and is almost seedless. Its smooth rind is easy-to-peel and the fruit is rich in its sweet citrus flavor.

Valencia oranges are thought to be one of the world’s best-tasting oranges. If you love orange juice, this is the one to buy!

Like all citrus fruits, grapefruit is rich in vitamin C and helps lower cholesterol. Grapefruit seeds are said to contain very high antioxidant and antimicrobial properties.

The flesh of grapefruit comes in red, white or pink, depending on its cultivars. The taste ranges from sour to semi-sweet to slightly bitter.

Read more about the health benefits of grapefruit.

The oroblanco (literally meaning “white gold“) is a sweet, seedless citrus hybrid fruit that is often referred to as oroblanco grapefruit. It was developed as a cross between an acidless pomelo and a seedy white grapefruit.

Oroblancos are either round or oval-shaped with rind that is thicker than a grapefruit. It lacks the bitterness associated with grapefruits, often peeled and eaten at breakfast, like an orange. 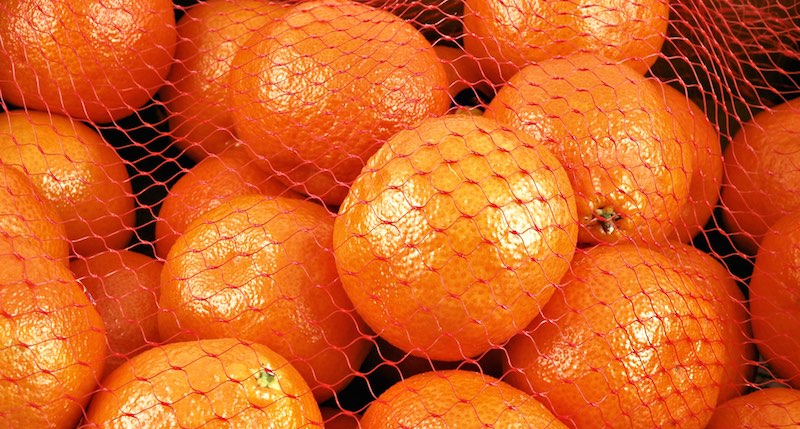 Tangerines are smaller and less rounded than common oranges. The taste is sweeter and stronger, with very thin peel, generally very similar to mandarins.

Clementine is a very close cousin of tangerine. They are small, sweet, easy to peel and makes for a very popular snack. Between the two, tangerines are less sweet and with more seeds.

Tangelo (citrus x tangelo) is a citrus fruit hybrid of a tangerine and a grapefruit, sometimes referred to as a honeybell because of its shape. It has a tart, tangy, tangerine taste and is juicy.

Tangelo skin is somewhat loose and easier to peel compared to the common orange. It can be distinguished by its characteristic “nipple” at the stem.

Kumquat (or cumquat) closely resembles the orange in color and shape but is much smaller at approximately the size of a large olive.

The essential oil of the kumquat peel contains much of the aroma of the fruit, composed mainly of limonene which makes up over 90% of the total. 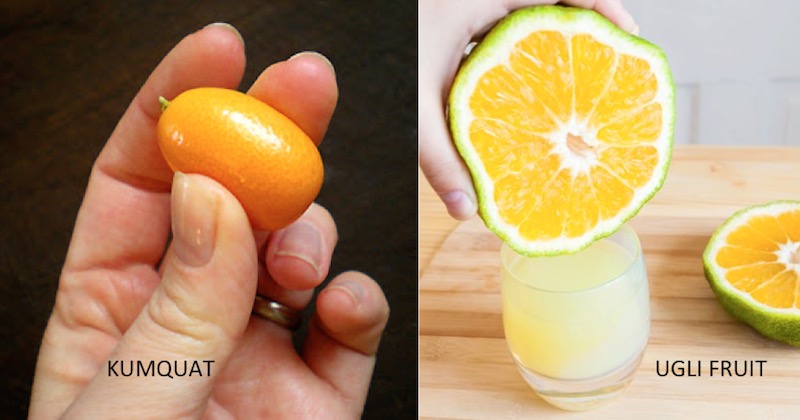 The ugli fruit is a Jamaican form of tangelo, a fruit created by hybridizing a pomelo, an orange and a tangerine. The name is a variation of the word “ugly”, which refers to the fruits ugly appearance that is rough and wrinkly.

The taste of the ugli fruit is more sour than an orange and less bitter than a grapefruit.

True lemons are the regular lemons that you see in most grocery stores. They taste acidic (but are alkaline-forming) and is often used in juicing. Lemons are a great alkalizer and detoxifier.

The acidic lemons when consumed, help your body to absorb nutrients many times better. Always use organic whenever possible, and juice lemons with their peel to enjoy the essential oil benefits that are in the peel.

Read more about the health benefits of lemon.

Meyer lemon (citrus x meyeri) is a cross between a citron and a mandarin/pomelo hybrid that is distinct from the common or bitter oranges.

The Meyer lemon fruit is yellow and rounder than a true lemon. The skin is fragrant and thin, deep yellow in color, with a slight orange tint when ripe. It has a sweeter, less acidic flavor than the true lemon.

The Buddha’s hand is another variety of the citron fruit. It has a sweet, lemon blossom aroma with no juice nor pulp. The pith is not bitter, so the fruit is usually zested or used whole in desserts, savory dishes, alcoholic beverages such as vodka, or made into candies.

In China, the Buddha’s hand fruit is a symbol of happiness, longevity and good fortune. It is also a traditional temple offering and given as a New Year’s gift. 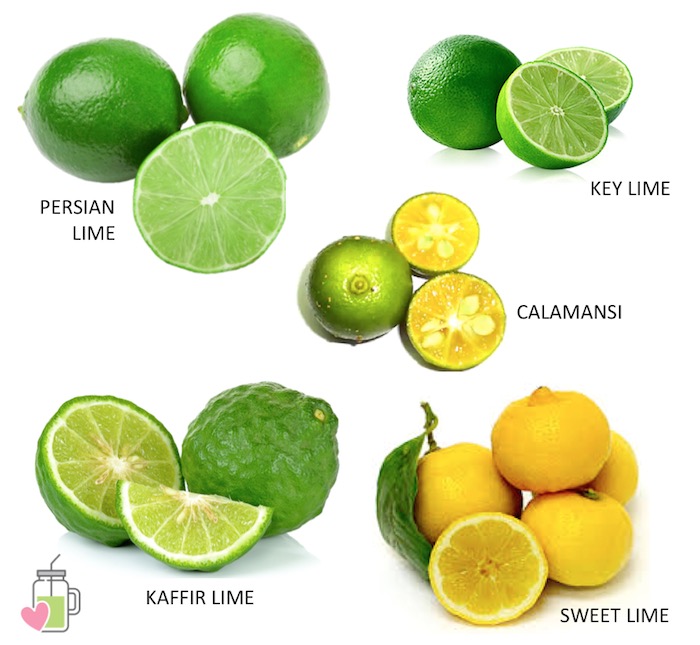 Persian lime (citrus x latifolia) is a citrus hybrid cross between key lime and lemon. This variety is the most widely cultivated lime species and accounts for the largest share of the fruits sold as limes. It is often sold while still green, but it turns yellow as it ripens.

The fruit measures about 6 cm (2.4 inch) in diameter with slightly nippled ends. Compared to key limes, the taste is less acidic and non-bitter, the size is larger, it has no seed, it is hardy and has a longer fruit shelf life.

Key lime (a.k.a. Mexican or West Indian limes) is a citrus hybrid (micrantha x citrus medica) of about 2.5 to 5 cm (1 to 2 in) in diameter. Compared to the Persian lime, it is smaller and seedier, has a higher acidity, stronger aroma and thinner rind.

Kaffir lime (citrus hystrix), also known as makrut lime, is a citrus fruit native to Southeast Asia and southern China. Its fruit and leaves are often used in cuisine and its essential oil used in perfumery.

The juice and rinds are used in traditional medicine in some Asian countries. The juice is also used in shampoo as it is believed to kill head lice.

Calamansi (citrofortunella mitis) is an intergeneric hybrid between the mandarin orange and the kumquat. It is native to the Philippines and surrounding countries.

The taste of the fruit is sour and it is used to make marmalade. The juice is used in specialty dishes or condiments, added to tea, soft drinks, water and cocktails.

Sweet lime is also known as sweet lemon. It has a very mild, sweet flavor and is less acidic than the common lime or lemon. It is often used for juicing or eaten whole.

Sweet lime is commonly consumed as a fruit drink in India, Pakistan and Bangladesh. 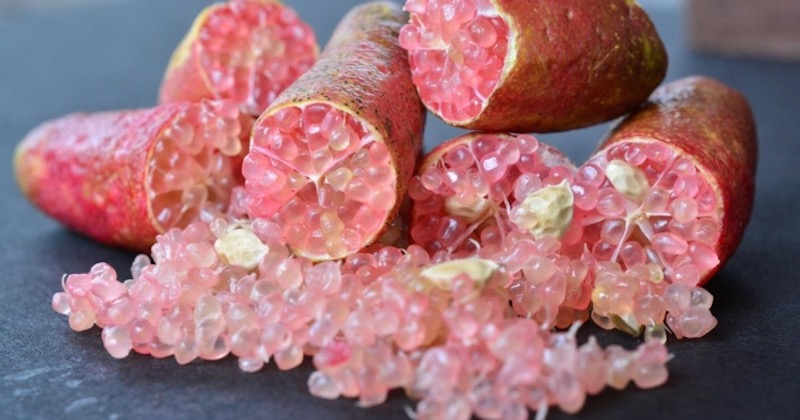 Finger lime (citrus australasica), or caviar lime, has been recently popularized as a gourmet bushfood. The fruit juice is acidic and similar to that of a lime. It is also used to make marmalade and pickles.

The globular juice vesicles (a.k.a. pearls) have been likened to a “lime caviar” which is used as a garnish, or added to various recipes.