Stop Eating “Foods” From These Companies That Contain Cancer-Causing Ingredients

The release of the infographic by Oxfam International is the first step to avoiding these faceless corporations. Oxfam is an international confederation of charitable organizations focused on the alleviation of global poverty.

Take the time to study the image and make the conscious decision to avoid the brands on the list.

Although the list is comprehensive, there is no guarantee that Oxfam have successfully identified every ‘Big 10’ item in the grocery store. Bear this in mind when you next go shopping, and read up on the food you are buying. You should always know where your food is coming from and who is responsible for producing them. 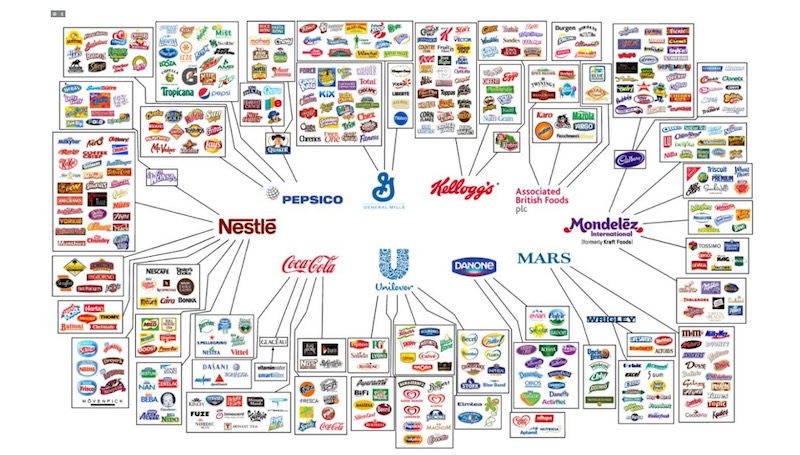 The best solution is the advice that I always give when it comes to ensuring that you are eating ethically and healthily. Where possible avoid branded foods, and even chain grocery stores. Buy your food from local independent stores and farmer’s markets. If we all did so we could stop the growing influence of the ‘Big 10’ which would force them to change their bad practices.

As Oxfam’s report states: ‘The world’s largest food and beverage companies have a lot of power—but you have more. And because they’re not using theirs enough to help poor communities or the planet, you can use yours to change the way they do business.’

They Produce Harmful Foods That Drive Up Pharmaceutical Profits

Many of these brands manufacture food products that are filled with additives such as artificial flavors and colors, dyes, preservatives and many more. These additives have been linked to a variety of serious health problems, including cancer.

Aside from harmful substances that are deliberately added to these food products, some of these companies have been known to sell foods that are unknowingly contaminated.

Here are some brands that are known to use unhealthy additives very liberally. Take a look and find out why you should stop eating food produced by these companies. 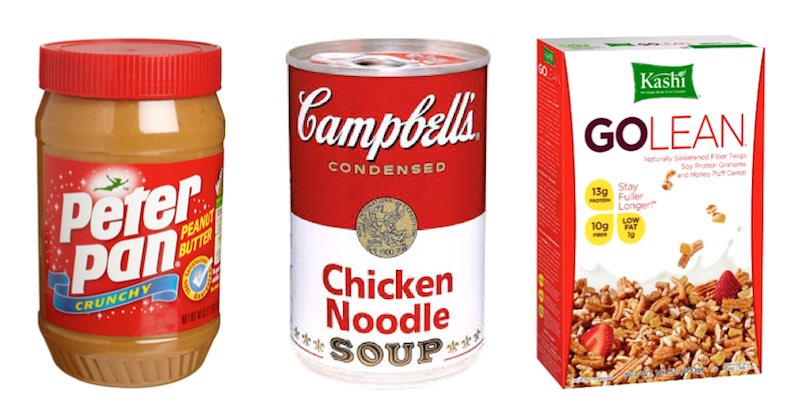 ConAgra produces food products under brands such as Snack Pack, Slim Jim, Banquet, Orville Redenbacher, P.F. Chang’s and many other snacks that are consumed regularly across North America.

The popularity of ConAgra products make it very disturbing when you find out about the numerous health code violations that they have been found guilty of.

In 2007 they were fined $11.2 million after it was discovered that over 700 Peter Pan Peanut Butter products were contaminated with salmonella.

In 2005 they were forced to pay approximately $250,000 after being found guilty of violating the Clean Water Act.

In 2002 ConAgra recalled over 19 million pounds of meat that were contaminated with E.Coli, and it was reported that contaminated meat from ConAgra had been circulating the market months before it was recalled.

With all of these health code violations, it really is a wonder how ConAgra is still in business.

Campbell’s Chicken Soup could have been found in pantries across the U.S. for decades. However, its wholesome image was tarnished when it was found out that the company had lied about using the controversial compound bisephenol A in its soups.

The Food and Drug Administration (FDA) used to claim that this compound was safe, however in 2010 they changed their stance on the subject. The FDA has expressed concern over evidence that BPA affects the brain, behavior and prostate glands of young children, fetuses and infants.

Everybody knows that drinking Coke is bad for you, but most people don’t know the extent to which it can damage your health.

It also contains phosphoric acid, which can cause vomiting, nausea, stomach cramps and diarrhea and can possibly permanent damage to your body. Long term exposure has also been shown to cause dermatitis.

Coke might actually be better used as an industrial cleaning agent than as a drink!

In 2008, Nestle-produced baby formula was being pulled off of the shelves from various countries in Asia.

This was because authorities in those countries had found traces of melamine in the baby formula. Melamine is a poisonous compound that was said to be responsible for the death of four babies and the poisoning of over 6000 others. Of these more than 6000 poisoned babies, at least 158 of them were seriously ill with kidney failure.

Products that contain glyphosate are said to induce burning in the mouth and throat, nausea, vomiting and diarrhea. Fatalities have also been reported due to the ingestion of glyphosate.

Pepsi-Cola contains many of the same harmful ingredients found in Coca-Cola, including caramel food colouring, which is linked to development of lung tumors, and phosphoric acid which can cause a variety of symptoms including burning sensation, nausea and vomiting.

Lead exposure has been linked to neurological impairment such as learning disabilities and a lowered IQ.

According to Sean Palfrey, MD, a pediatrician, “No amount of lead ingestion is ‘safe’ for children.”

Chronic exposure to cadmium has been linked to kidney, liver and bone damage in humans. Although children are more susceptible to exposure effects from low doses of cadmium, it can affect adults as well.