Mammography Vs Thermography For Breast Cancer Screening And Early Detection

Are you looking for information on breast cancer screening? Well, it is absolutely a smart idea to have a regular examination for early detection, especially if you have a positive family history for the same (in this case, screening is recommended from an earlier age). However, the method of screening that you choose must be safe.

Breast cancer is not an unusual disease. A study meta-analysis concluded for the year 2012, the following statistics:

With the growing advancements in medical technology, several modalities are now accessible that can help in detecting the presence of breast cancer cells at various stages. 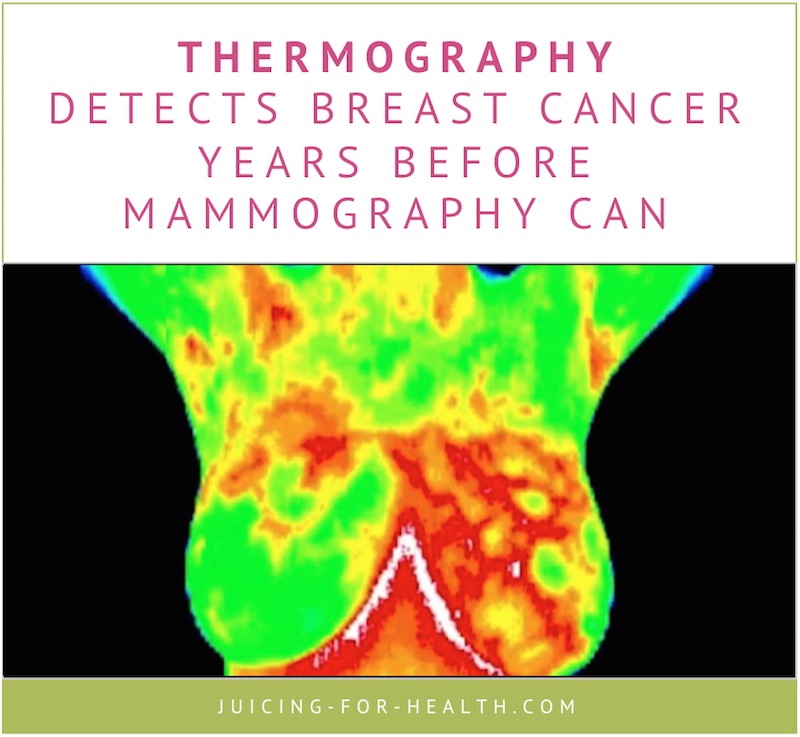 It is always good to know about the basics and types of the available approaches for early cancer detection. You can discuss with your healthcare provider regarding the method you should use. The conventional breast cancer screening methods are:

Just How Safe Is Mammography?

At present, mammography is one of the most-widely used methods for screening breast cancer.

A study published in The Lancet Oncology in 2011 demonstrated for the first time, that women who received the most mammography breast screenings had a higher cumulative incidence of invasive breast cancer over the following six years than the control group who received far less screenings.

Dr Veronique Desaulniers, founder of BreastCancerConqueror.com, is a Doctor of Chiropractic who herself had been a victim of breast cancer. She now helps women from all around the world to live their best life through healing of their body, mind and soul.

Dr V (as she is famously known) has this to say in the video above:

“Well, let’s start with mammograms. Again, by the time they see a lump on a mammogram, it has taken five to eight years to develop. And if a woman follows the 10-year protocol of getting a mammogram every year or every six months, she is getting as much radiation as a woman had at Hiroshima; the atomic bomb, if she stood a mile away from the epicenter. She is getting over 5 rads of radiation in a mammogram if she follows the traditional methods of mammography.

So mammograms cause a lot of problems – the compression, the radiation. Studies have shown that they can increase your risk of cancer. And the new study that came out in Canada, it was a 25-year study where they found that mammograms did not decrease breast mortality rate at all. In fact, they were just as effective as a self breast exam that women do.

So if we put mammograms aside and we look at the technology with thermography, which has been around for years and can detect physiological changes at a very early stage, wouldn’t you rather know that there is possibly some changes going on in your breast or in your abdomen five to eight years before you have a diagnosis? And with thermography, there is no pain, there is no compression, there is no radiation. It is just a beautiful tool to have in your pocket.”

Thermography, also known as Digital Infrared Thermal Imaging (DITI), is employed to mark the heat areas of your body by the virtue of its ultra-sensitive, high-resolution digital infrared rays (IR) cameras.

Breast cancer involves inflammatory processes and the mediators of this course release heat. Using thermographic techniques, the scanner is able to create a temperature map of your body that can illustrate the greater heat-producing areas clearly. This is how your doctor may be able to trace the abnormal cellular processes and by the help of which, further diagnostic procedures and course of the disease can be evaluated.

How Does Thermography Work To Detect Early Cancer?

Every cell in our body naturally gives off some small amount of metabolic heat that increases in temperature when an abnormal condition occurs. A thermographic camera is able to detect these natural heat that the body emits at a cellular level. It makes thermal imaging possible in that it’s able to detect abnormal activities five to eight years before a lump can be detected by mammography.

In their earliest stages, multiplying cancer cells are highly metabolic and need an abundant supply of nutrients to maintain or accelerate their growth. In order to grow, they increase circulation to their mutilated cells by keeping blood vessels open, activate inactive blood vessels, and create new ones  (a process known as neoangiogenesis).

These vascular processes cause an increase in temperature in the affected regions. Whereas the newly formed and the activated blood vessels have a distinct appearance that thermography can detect even at that early stage.

Of course, in the presence of precancerous and cancerous cells and with all that multiplying activities going on, inflammation is definite. Inflammation emits heat that shows up in a thermogram. This is why thermography is often used to detect not only inflammation and cancer growth, but also other changes in the human body such as infections, trauma, allergies, flu or fever. 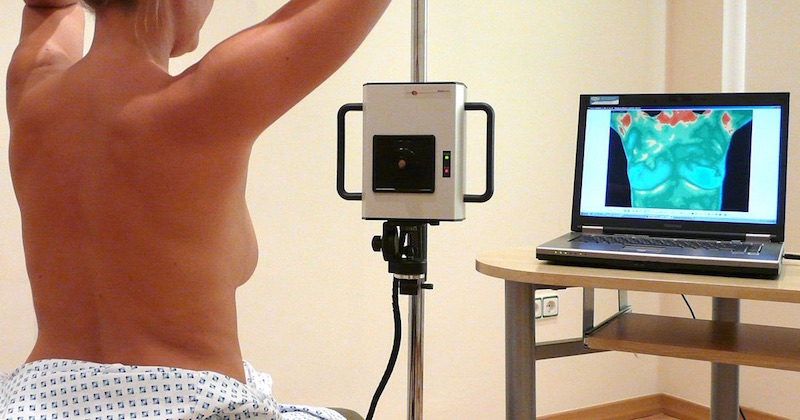 If cancer is caught in it’s early stage, there is a better chance of treating it successfully. And, because at at early stage, it has less likely to spread, a simple surgery may be able to remove them.

Latest research works have been successful in favoring thermography for breast cancer screening for early detection. Here is how it is emerging as a promising technique for the upcoming years:

Tracing heat patterns of the breast cells can predict the course of the disease as well as the risks quite earlier than its outcome. A study was conducted that involved 1,245 women who underwent:

One-third of the subjects showed up with histologically-proven cancers within a time frame of five years. In their cases, thermography was able to detect metabolic changes in the lesion cells that had the potential to grow rapidly, and its predictive value remains far better than that of a biopsy.

When opting for a procedure, you would certainly want to decide in favor of the one that yields accuracy of high scores. Experimental studies have been successful in concluding that cell patterns exhibited on a thermogram are nearly 80 percent accurate. Hence, thermography takes an edge over mammography.

With mammogram, it may be harder to peak through the anatomical abnormalities of denser breast tissues, especially those of premenopausal women.

On the other hand, in a study that compared efficacies of the three most-adopted breast cancer screening modalities: clinical examination, mammography, and thermography; the certainty of the thermography for larger lesions and for the ones with lymph node metastasis was significantly lower as compared to that of mammography.

A compelling reason that questions the role of mammography is the high probability of “false positive results”. A retrospective cohort evaluation for breast cancer screening and diagnosis of 2,400 women subjects falling between the ages of 40 and 69 years led to the discovery that, mammography stood for a cumulative risk of 49.1 percent of false positive results on an estimate. The research included four mammograms and five clinical breast examinations per subject over a 10-year period.

It should be the first choice for premenopausal women whose breasts tend to be denser. Thermography can differentiate fibrocystic tissue, scars or breast implants from that of cancerous cells.

2. Detect cell changes outside of the breast region

Many times precancerous cells can start forming from the armpit area due to use of underarm deodorants, and the concentration of lymph nodes in that area. Mammography is not the best method to use for screening outside of the breast region, the armpit area included.

3. Great as an additional test

4. It is painless and radiation-free

As you may have experienced or heard from other women, the pressure of a mammogram machine is equivalent to putting a 50-pound weight to compress your breasts. Many who have done mammogram will be able to tell you that it is painful. And this is especially traumatic for women who have small breasts.

It doesn’t make sense to use high exposure to radiation from mammography to find what we know is caused by radiation!

With thermography, you will be required to sit in front of the scanner that scans your body heat. Thermography is non-contact, non-invasive, uses no painful breast compression, nor emits any harmful radiation.

Thermography is so safe that it can be used on pregnant and nursing women without any side effects whatsoever. It’s merely taking an image of your body heat, like shooting a photo!

Is Thermography Available In Your Country?

Since posting this article, I’ve received many emails from readers asking if thermography is available in their countries. So, here’s my answer:

In some countries, you may come across sites that say that “Thermal Imaging is not approved …”, or “…. not encouraged”, or similar phrases. These are often countries where conventional methods such as mammography dominates. Despite these statements, chances are high that your local alternative medicine clinics may offer these services.

In which case, google “thermal imaging” or “thermography screening” and your city name, to find an alternative medicine clinic that provides such a service. In bigger cities, you would most likely find this service available. All the best!

As with anything so important as your health, I suggest that you make an informed decision. Know the source of your information. There will always be two sides to healthcare. There is the conventional, invasive method; and there is the traditional, holistic and natural approach. Decide which route you wish to take.

You may have been told or formerly educated about mammogram but now decided that it is, after all, not the best way to go. There is no need to feel any guilt nor be intimidated into going that route. Take your own health into your own hands and decide what you think is best and safe.

When done properly, thermography for breast cancer screening has the true potential to detect breast cell anomalies long before mammography can detect cancer. By early detection (up to eight years earlier), it allows you to get help and implement lifestyle changes that can improve your health significantly.