Half Somersault Maneuver Cures Vertigo For Good, In Just A Few Minutes

AURORA, Colorado (CBS4)—A doctor at the University of Colorado Hospital has become a YouTube sensation. That’s because she has developed a simple maneuver to treat vertigo at home.

CBS4 Health Specialist Kathy Walsh first explained the treatment in a story in 2012. Since then, it’s gotten 2.6 million views! 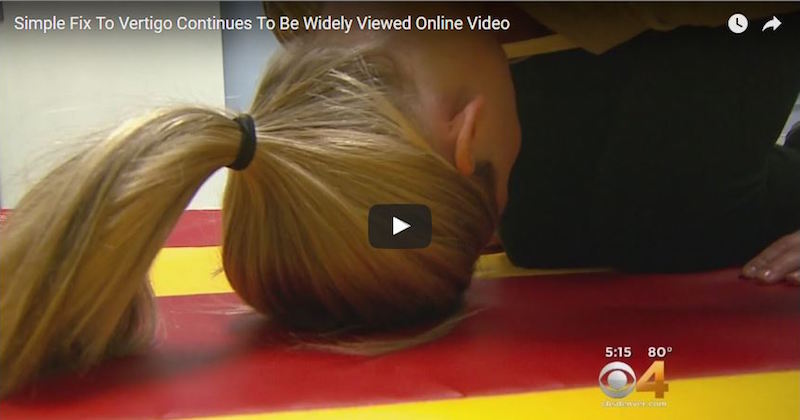 BPPV has been characterized as the most common form of vertigo and the “half somersault maneuver” or otherwise described as “Foster Maneuver” has been working wonders in treating this condition.

The inner ear has three semicircular canals which are interconnected by fluid pathways and have gravity sensors in them. These are being capped by a bed of crystals which may be dislodged from where they are and enter into any of the canals or other parts of the ear.

When the dislodgement happens and crystals get into the semicircular canals, a mechanical disorder happens. The system will function incorrectly and the tilting motions of the said crystals will be interpreted as intense dizziness.

When one has vertigo, he experiences this incredible spinning sensation. It’s like he’s riding in a merry-go-round, only that the feeling isn’t merry but very disabling. This vertigo is mostly experience while in bed. Those afflicted get a sudden spinning of his environment for several seconds. It often recurs from time to time especially when one tries to sit up, lie down or roll over in bed. Balance is sometimes affected while others experience severe dizziness and vomiting.

Carol A. Foster, MD And Her Half Somersault Maneuver

Carol A. Foster, MD is an Associate Professor and currently the Director of the Balance Laboratory, University of Colorado Hospital. She had her MD at University of California San Diego School of Medicine, San Diego, CA.

Doctor Foster is has been afflicted with vertigo herself. She had Meniere’s disease, a condition of the inner ear which makes her experience bouts of vicious dizziness and nausea. This happens almost every day and it lasts for a couple of hours most of the time.

She had a surgery to cut the nerve in the ear which triggers her vertigo. The surgery solved the problem until 14 years later when she started to feel intense spinning again and that it has gotten worse than her vertigo before. It was the turning point of her life and this is one of the reasons why she decided to fight the condition and finally had this medical breakthrough.

The Half Somersault Maneuver

The Half Somersault Maneuver that Doctor Foster devised intends to roll out the particles from the posterior/inferior semicircular canal. This maneuver must be performed well and the process differs when one treats vertigo in his right or left ear.

The maneuver should be followed as instructed in the Half Somersault Maneuver video below. It helps make sure that the crystals are not going to fall on the horizontal/lateral semicircular canal as this may lead to horizontal spinning (horizontal canal BPPV) which would indicate complication and will only require a different kind of maneuver.

The half somersault, Epley, and the Semont maneuvers have been proven very effective home exercises in removing crystals from the semicircular canals. It is important to space the time between maneuvers so as to reduce the risk of horizontal canal BPPV.

The half somersault does not require more significant movements such as standing up from one figure to another. A patient can just assume the initial half somersault position, put their head upside down like they are doing a somersault, wait for a few seconds for the dizziness to subside and then raise the head at back level.

They will then wait for dizziness to subside and get back again to their sitting position. The only impediment we see with half somersault is that they cannot be applied with people who have impaired flexibility like people with knee, back or neck injuries and with people whose weight are huge enough to perform the bending. But when one does not have these health issues, he can very well do these maneuvers in treating their Benign Paroxysmal Positional Vertigo or BPPV in a form of home exercises.