Early Signs Of Cancer In Women That Are Often Overlooked

As stated in the 2018 report from the International Agency for Research on Cancer, one in every 6 women around the world will develop cancer at some point during their life, and one in 11 women will die from it.

According to the CDC, cancer remains the second leading cause of death in women in the US. It’s also one of the most difficult diseases to diagnose early, even though the potential impact this could have on the population is just huge.

Just imagine this (data from insights of the Cancer Research UK organization): 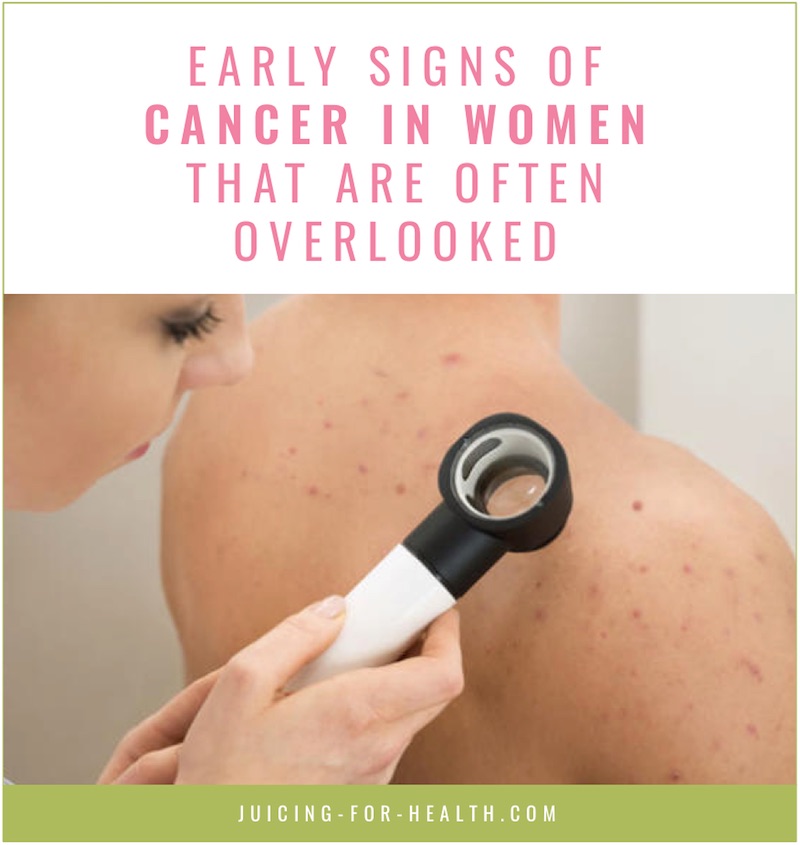 Now, guess what is thought to be the main reason for delayed cancer diagnosis? Poor awareness and lack of knowledge of early cancer symptoms.

It’s time to boost this awareness and enforce early cancer diagnosis in women!

Are you with me?

According to the World Cancer Research Fund, this is the list of the ten most common cancer types in women worldwide (together they make more than 76.6% of all cases of cancer):

Besides these, there are two other women-only types of the disease (cancer of the vulva and vagina) but they are extremely rare and account for just 0.5% and 0.2% of all cancer cases respectively.

Armed with this data, let’s jump straight to the symptoms.

Most Common Early Signs of Cancer in Women

Cancer is an extremely exhausting disease, and often this increased fatiguability is the first symptom to appear. Of course, exhaustion isn’t cancer-specific, but cancer should be ruled out in all cases of abnormal tiredness and lethargy that persists for over a week.

2. Breast swelling, even in the absence of any palpable lumps

Thanks to all the worldwide efforts to increase awareness for breast cancer, most women know that the appearance of a lump in their breast is a no-exception reason to see the doctor immediately.

Well, here’s the thing: persistent swelling in just even part of a breast, even if there’s no lump at the time being, shouldn’t be taken lightly. Cancer comes in different forms, and sometimes they aren’t solid and distinct like a palpable lump.

Related reading: Breast pains that are not cancer.

In some cases, weight loss is a good thing but when it happens without an effort to lose weight, it wouldn’t hurt to check the nature of this unexplainable loss of weight.

Of course, losing a pound or two is nothing to worry about, but if you dropped over 5% of your total body in 6-12 months without dieting or exercising to achieve this—that’s something to discuss with a physician you trust.

Rule of thumb: any bleeding besides your usual periods could be an alarming sign. This includes (but isn’t limited to) the following:

There can be dozens of different reasons for vaginal bleeding, from hormonal changes to different infections, but cervical and uterine cancer are still two of them.

Better to be safe than sorry: when diagnosed early, these two types of cancer have very high survival rates. 92% of women diagnosed with cervical cancer at an early stage live for at least 5 years, and the respective number for early diagnosed uterine cancer is 95%.

5. Abdominal distention (not to be confused with bloating)

Many people use these terms interchangeably, but they actually mean different things that don’t always come together.

Bloating means a sensation of fullness and tightness in the abdomen while distention means a visibly enlarged abdomen. Studies have found a link between persistent abdominal distention (but not episodical distention) and ovarian cancer, so stay alert.

About 95% of women with this deadly disease experience it as the earliest symptom.

Any of the symptoms mentioned above could be an early sign of thyroid cancer, especially if they persist or get worse over the course of a few weeks, according to the American Cancer Society.

As a rule, pain and swelling appear later, followed by trouble breathing. Thyroid cancer is treatable and curable, so it’s important to pinpoint it as early as possible for the best results.

A noticeable change in the frequency of bowel movements or stool consistency that persists for more than 6 weeks could be an early symptom of colorectal cancer in people over 60 years old.

In people younger than 60 years, changes in bowel movements should be accompanied by rectal bleeding or iron deficiency anemia to be considered a likely symptom of colorectal cancer.

8. Strange, persistent coughing (especially in non-smokers) or changes in previous cough (in smokers)

Lung cancer is much more common in men than in women, but it’s still one of the deadliest types of cancer out there; all possible efforts should be made in order to diagnose it as early as possible.

In non-smokers, the appearance of an annoying cough that doesn’t go away could be the first symptom to appear, along with shortness of breath and wheezing.

In smokers, an alarming sign would be a progressive change in their ”usual” cough—in frequency, phlegm color, or accompanying sensations.

Easy bruising and bleeding than what is normal, may require a further check by your healthcare provider.

This symptom usually suggests something abnormal happening with the platelets and red blood cells, which can be a sign of leukemia. Over time, leukemia cells crowd out red blood cells and platelets, impairing your blood’s ability to carry oxygen and clot.

Virtually all cancer sufferers live for at least 5 years, and often this number goes way beyond 10 or 20 years.

So stay alert and never stop educating yourself: you never know when this knowledge may save a life.