Why Processed Meat Is Bad For You, And How It Increases Risk Of Cancer!

Processed and cured meats are a worldwide guilty pleasure, but more and more researches are showing that processed meat is bad for you due to their carcinogenic ingredients.

Whether it’s pizza, tacos, bacon, hot dogs, or any kind of sausages … We just seem to have “a thing” for processed meat, and maybe that’s something etched in our genetic memory. After all, mankind has been using different curing processes to preserve meat for thousands of years already!1

However, the more we learn about the matter, the clearer it gets that bacon and salami could actually be shortening your life, one bite at a time.

In fact, a statement from a World Health Organization (WHO) research agency classified processed meat as carcinogenic (cancer-causing). It stated that eating 50 grams daily of processed meat (that is about 1-2 sausages) increases the risk of colorectal cancer by 18 percent. Yikes!!

In this article, we will discuss everything you need to know, to help you make a conscious choice on where you stand in this matter. 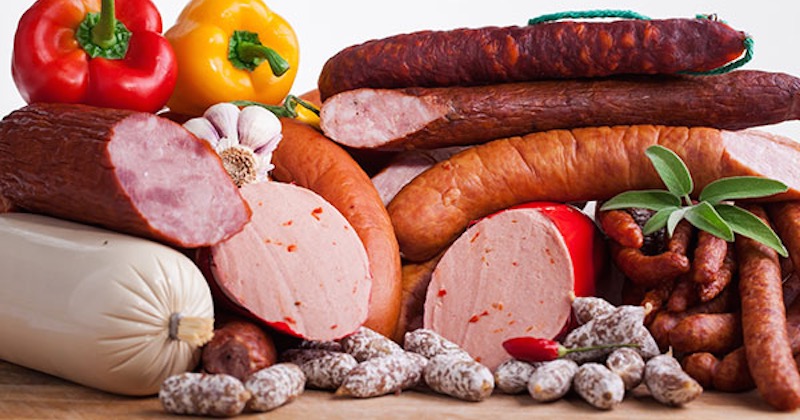 What Is Processed And Cured Meat?

Processed meat is the general term for meat that was somehow modified to taste better and/or have a longer shelf life.

For example, curing (adding salt and other additives), drying, smoking, and fermentation are some of the most widely used approaches to processing meat.

Some of the most popular processed meats include:

Processed meat is meat that has undergone curing, salting, fermentation, smoking and other modifications to improve shelf life, taste and appearance.

Processed meat are treated with different salts, spices, nitrates and nitrites, as well as other substances (natural and not-so-much) for flavoring and preservation. The general goal is to draw the moisture out of the food so that bacteria cannot grow in it.

What Is Deli Meat?

Deli meats refer to precooked or cured meats that have been sliced and prepared for sandwiches and other light dining options. They are also sometimes called sandwich meat, lunch (or luncheon) meat, cold cuts, or sliced meats.

Deli meats can be classified as whole cuts, sectioned or formed meats, also as processed meats.

BHA and BHT are food additives that are used as a preservative to keep food from spoiling. These are added in processed meat to prevent the oils in the meat from oxidizing and becoming rancid. Oxidation affects the flavor, color and odor of foods, reducing its appeal to consumers.

Various health organizations have raised concerns that BHA is a possible human carcinogen, and an endocrine disruptor.

BHT has been linked to an increased risk of cancer in lab mice. Long-term exposure to high doses of BHT is toxic, causing liver, thyroid and kidney problems, affecting lung function and blood coagulation.

BHT can promote growth of tumors, affect sex hormones and result in problems in the reproductive system.

Curing is the addition of a combination of salt, sugar and other additives. Salt improves the taste of meat and preserves it by stopping bacterial growth.

Have you ever noticed that violent thirst you experience after eating foods with too much salt? The ingested salt in your stomach and bowels draws the water from your other tissues (and even from your blood) through a process known as osmosis, and your body feels it should restore the balance by drinking more.

Basically, the same thing happens when meat is processed by salts and other substances. All living creatures need water to thrive, so if you dehydrate the meat—bacteria won’t grow in it. Different salts (like sodium nitrite) further inhibit bacterial growth.

During meat processing and curing, nitrates and nitrites are used for different reasons. For example, sodium nitrite is one of the most popular additives from this group, and here’s why it’s used:

So far so good, right?

The problem is that nitrates and nitrites are linked to a great number of health dangers!

Although they can be very beneficial for your health, it’s a matter of where you get them from, and processed meat would be your worst source.

Nitrate From Plants vs. Nitrate Used In Processed Meat

Vegetables are the richest source of nitrate in Nature.

Just think about this:

80 g of beets, spinach, spinach, lettuce or radish have about the same amount of nitrate that a whole kilo of ham or salami.

There are many studies pointing out that nitrates from veggies and fruit is actually good for you:

If nitrates are good then what’s the problem with the nitrates found in processed and cured meats then?

You see, nitrates are building blocks for something really dangerous, a group of substances known as nitroso compounds. Nitrosamines are the most known subgroup of them.

These two factors are the answer to why processed meat is so bad while vegetables are good, even though vegetables have much more nitrates than meat.

Now let’s take a good look at some specific conditions. 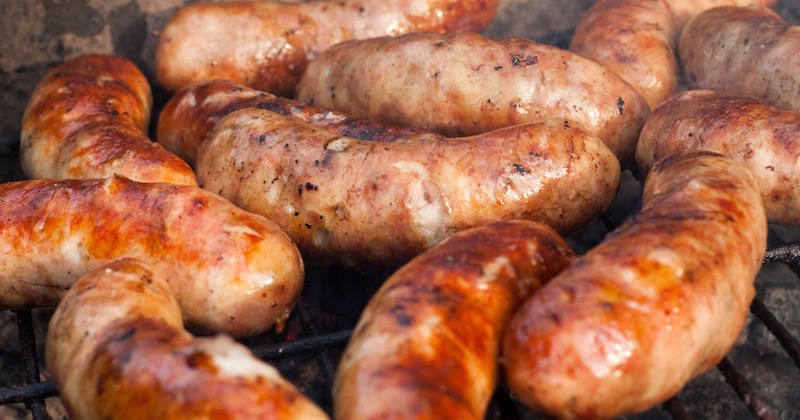 All nitrosamines are confirmed carcinogens, acting primarily in the gastrointestinal tract. Here are some diseases they were linked to:

Processed meats when heated at high temperatures, turn nitrites into nitrosamines. Animal models used to test the carcinogenic potential of these chemical substances were found to have mutated genes and adducted DNA.

In this study, a high consumption of processed meats is associated with an increased risk of stomach cancer.

Tests on nitrosamines produce a wide range of tumors in more than 40 animal species. Another study shows that nitrosamines and intake of related food are strongly linked to esophageal cancer.

Colorectal cancer is the first cause of cancer death among non-smokers in affluent countries, and the five-year survival (approx. 60%) improves too slowly with the advances in the treatment of the disease.

Basically, nitrosamines can lead to cancer in pretty much any organ of your body, but the stomach and bowels are the most susceptible.

Childrenn who eat more than 12 hot dogs a month have nine times the normal risk of developing childhood leukemia.

Another study showed that children who regularly eat cured meats like bacon and hot dogs may have an increased risk of leukemia.

Among 515 Taiwanese children and teenagers with and without acute leukemia, those who ate cured meats and fish more than once a week had a 74 percent higher risk of leukemia than those who rarely ate these foods.

Another report suggested that children born to mothers who eat at least one hot dog per week during pregnancy have 2-3 times the normal risk of the child developing brain tumors.

It was determined that consumption of as little as 3 mg of nitrite a day (from about 125 g of cured meat) during pregnancy increases the risk of the brain cancer.

Conclusion: Processed Meat Is Bad For You

The nitrates and nitrites present in vegetables and foods are good for your health because they aren’t turned into nitrosamines due to the high content of antioxidants (like vitamin C) in these foods—and because we eat them mostly raw or boiled.

The nitrates and nitrites present in cured and processed meat are turned into nitrosamines in high temperatures (like during frying) and in acidic environments (gastric juice).

Nitrosamines are highly carcinogenic: they significantly increase the risk of stomach cancer, esophageal cancer, colorectal cancer, and were even linked to childhood leukemia and brain cancer. And these are only two of the many harmful ingredients in processed meats.

Long story short: if you want to live a long and healthy life, ditch the bacon and ham, drop the sausages and salami, let go of the pastrami and jamon.

Processed and cured meat may be tasty, but it’s not really worth messing up your health for, right?