by: Sara Ding
in Vegetables

Watercress (Nasturtium officinalis) is a semi-aquatic perennial herb belonging to the family of Brassicaceae, which has been known since time immemorial for its flavoring, therapeutic and aphrodisiac properties.

Watercress usually grows along the banks of slow-running streams and rivers in Europe, Asia and America. It is characterized by its small, round leaves, with a pungent, peppery flavor. The small white flowers appear in flat clusters are called corymbs. 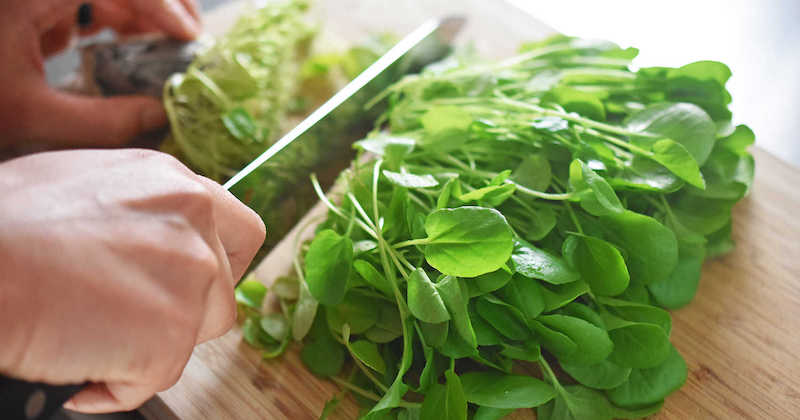 The fresh, tender leaves of watercress have to be harvested just before flowering, because after flowering they become bitter and are no longer good to eat.

Watercress has a variety of uses, either as a flavoring herb or as a medicinal herb. In addition, watercress juice can be added to other vegetable juices to give them flavor and health benefits.

Watercress is rich in fiber, anti-oxidants, vitamin C, beta-carotene, folate, potassium, calcium, phosphorous and iron, and is a good source of iodine as well. In fact, it has more calcium than milk and more iron than spinach.

Its main active principles are classified as thyoglycosides (glycosides containing sulfur)—an anti-thrombosis with a mild anti-coagulant effect. Watercress also contain moderate amounts of vitamins B1 and B2, zinc, copper and manganese.

Watercress has plenty of health and therapeutic properties. However, due to its strong, pungent and bitter taste, it is never used alone, but is always added to juices, salads or other dishes as an ingredient, flavor or garnish.

Anti-anemic effect:  Watercress is particularly helpful in treating different types of anemia due to its high content in iron. Iron is essential for the synthesis of hemoglobin, and folic acid, which plays a key role in the maturation of red cells in the bone marrow. The right amount of vitamin C in watercress also makes better absorption of iron.

Anti-inflammatory properties:  Watercress is rich in vitamin C, which has an anti-inflammatory action and can help prevent or relieve the symptoms of cold, flu and other types of inflammation.

Antioxidant and anticancer effects:  Just as many other herbs, watercress is rich in antioxidants. Anti-oxidant substances help prevent or fight the damage caused by free radicals to body tissues, thereby contributing to prevent premature aging, as well as lower the risk of developing cancer and many other chronic or degenerative diseases.

Aphrodisiac effect:  Several historical sources show that watercress has been used for its aphrodisiac effect since the age of the ancient Romans and Persians. This could be due to its high zinc and iron content.

Blood glucose:  Although not definitely proven, it seems that watercress can help control blood sugar levels and prevent or treat high blood glucose. It is probable that the hypoglycemic effect of watercress is in part due to its high content in soluble fiber, that helps reduce the absorption of carbohydrates from the intestine. This effect is particularly helpful for individuals with diabetes.

Cough:  The sulphur glycosides found in watercress have been shown to modify bronchial secretions and exert an expectorant effect, which can be used to treat many forms of chronic bronchitis.

Digestive function:  Watercress does improve digestive function, due to its high content in vitamin C and fiber, which stimulate salivary and gastric secretions and the motility of the intestinal tract respectively.

DNA, preserve:  In a laboratory test, it was found that daily consumption of watercress increase the ability of cells to resist DNA damages to lymphocytes (white blood cells).

Eye health:  The high content in phytonutrients lutein and zeaxanthin are potent anti-oxidants; together with vitamin A and zinc all in this herb help greatly improve eye health.

Hair health:  Watercress can be used topically to treat dandruff and prevent hair loss, due to its sulfur, iron, zinc and vitamin A content. The best results are obtained by rubbing the scalp and the hair with a watercress tincture.

Hangover:  A hangover happens when the liver gets overloaded with toxic alcohol. Watercress juice is so concentrated with so much cleansing goodness that it activates the detoxifying enzymes in the liver for detoxifying a hangover.

Purifying effect:  Watercress has been used for centuries for its purifying effects. It enhances the diuresis and helps give the colon a good “spring-cleaning”, thereby effectively removing toxins from the body.

Skin health:  When used topically, watercress juice can be helpful in relieving skin eczema, as well as other skin conditions. Its high content of vitamin A and C best obtained by juicing are also beneficial for healthy skin.

Thyroid gland:  The high iodine content in watercress can help prevent goitre, improve the function of the thyroid gland and relieve the symptoms of many forms of hypothyroidism.

How To Consume Watercress To Ease Respiratory Problems

The sulphur glycosides in watercress makes it an effective expectorant. Watercress has been found to be useful for loosening mucus caused by cold, and getting rid of phlegm that causes cough. Other related respiratory ailments that might benefit from watercress are asthma and emphysema.

When consumed by individuals already suffering from a cold or cough, watercress helps shorten the duration of the ailment and reduce its intensity. When consumed at the first symptom, it helps prevent it from becoming a full-blown infection. 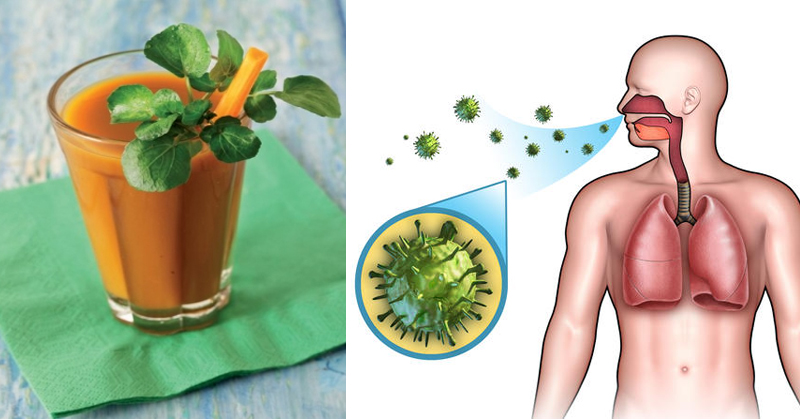 Watercress can be used as a basic ingredient for salads (using the leaves), sauces, or in soups. Watercress juice can be added to a variety of vegetable juices, to give them flavor and health benefits.

On its own, watercress juice is very strong and bitter. Like wheatgrass which is very potent, do not take more than two ounces of this concentrated green juice each time, mix it with other juices to make it more palatable and easy on the stomach. It blends very well with juices of carrot, potato, spinach and turnip leaves. Throw in some parsley too for their synergistic healing power. Squeeze in half a lemon to reduce its pungent taste.

The Chinese people like to boil watercress soup (with ingredients like dates, carrots, ginseng, gojiberries, black pepper, ginger, etc.). No doubt some nutrients are destroyed in the heat; phytonutrients cannot be destroyed but will leach into the soup. Discard the leaves.

People suffering from bladder inflammation may want to avoid or limit the consumption of watercress, due to its possible bladder pain-inducing effects.

People with hyperthyroidism may also want to limit watercress consumption due to its high content in iodine. If you are on medication, you might want to consult with your doctor before eating watercress or drinking its juice. Watercress is so wonderfully potent in all its goodness that it may react with the drugs you’re taking.