Carrol Krause, a former reporter for the Herald-Times of Bloomington, Indiana, had to retire from her journalism career because of an ovarian cancer diagnosis in 2014. Before she passed away in February, she wrote a blog titled “Stories by Carrol” highlighting the best and the worst of her last days. 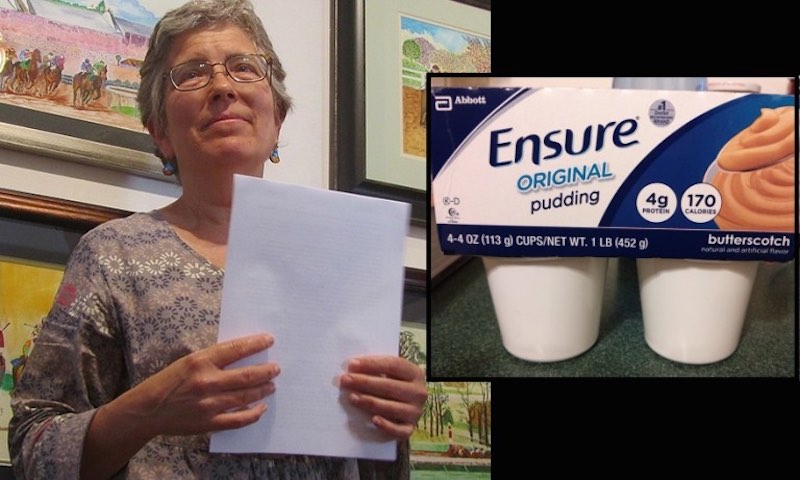 A few months ago she started having digestive issues and could no longer eat normal food. What hospice workers brought her as meal replacements horrified her.

Krause writes: “Hospice had the very best of intentions, [but] the stuff they sent over was not real FOOD. In fact, I’m outraged at the idea that they feed this stuff to dying people.”

What the hospice provided to Krause was a bag full of products by Ensure: pudding, shakes, and a drink that pretends to be apple juice.

All three are full of chemicals with about as much actual nutritional value as most commercial junk food1 and these drinks are meant to be the nutritional lifeline for people who are extremely sick.

Ensure is owned by Abbott Nutrition, one of the worst examples of a Big Food corporation masquerading as a healthy alternative you’ll ever see. The company has deep ties to the medical industry and as such you can find their products in just about every hospital today, which is bad news for millions of patients who are just trying to get healthier.

Ensure is a brand by Abbott that makes medical “nutritional shakes and drinks.”It makes big claims to customers such as “#1 Doctor Recommended”  and “Worldwide Leader in Nutritional Science” but in reality, their products are as far away from a healthy meal as you can get. Sadly, these products are often given to patients in extremely poor health, who need proper nutrition the most. Instead, when consuming these products they are receiving the following: preservatives, fillers, and chemicals.

To make matters worse, Abbott Nutrition is a member of the notorious pro-GMO organization the Grocery Manufacturers Association, and to date has given nearly a million dollars to fight against GMO labeling in the United States.

Does this sound like the type of company whose products you should be feeding your loved ones? After you see these products, their ingredients, and potential side effects,3 you’ll have the answer.

The front of the package for Ensure Clear portrays an orange drink with an apple next to it, the back of the package is quick to verify, however: this product “contains no apple juice” or any juice. Instead, its two main ingredients are water and sugar. It also contains the following: 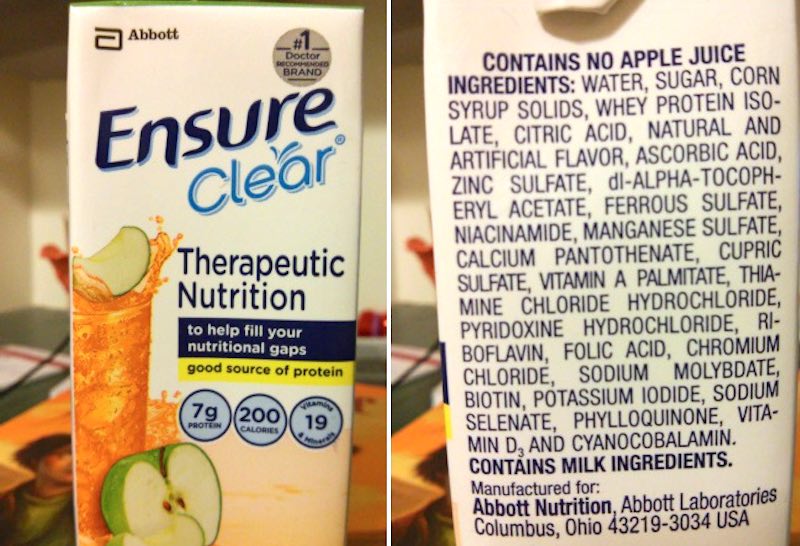 Corn Syrup Solids are made of dehydrated corn syrup, which is 100% glucose, a type of sugar that adds to the risk of obesity. Corn syrup is also almost always made from GMO corn and has been linked to diabetes, and cancer.4,5

Cupric sulfate is actually a pesticide and fungicide that is toxic and can cause gastrointestinal issues, anemia, and even death at high doses. It is also genotoxic, meaning it can cause the cells to mutate due to genetic damage.6

Chromium chloride is toxic7 and has negative effects on the reproductive system for both men and women, stomach problems, abnormal bleeding, and ulcers.

Sodium Selenite is a toxic ingredient produced as a byproduct of copper metal refining. Yet, it is often labeled as a “nutrient.” The Environmental Protection Agency has classified it as dangerous.8

Natural and Artificial Flavors can include a row of different chemicals, often derived from inorganic sources, and are harmful to health, adding to the contributions for illnesses in the whole body, including different types of cancers.

While our bodies, especially when sick, do require a lot of vitamins, there is a huge difference between natural vitamins derived from food or natural sources, versus synthetic vitamins.

Unfortunately, the vitamins contained in Ensure products and other commercialized “health” foods and supplements are almost always synthetic and are manufactured with chemicals.9 Generally speaking, when a new study comes out that claims that some vitamin is toxic at high levels, it is because only the synthetic version of it has been studied, yet it gets lumped together with natural vitamins.

Synthetics do not get absorbed by the body in the same way as natural vitamins because they have been “isolated”—they are separated from the entire vitamin complex and trace minerals and enzymes. What a synthetic vitamin is lacking, the body tries to make up for by itself and depletes its existing nutrients in the process.10

“This process results in an overall negative health effect while minimizing any gains that could have been achieved by the supplement,” according to “Nutri-Con: The Truth about Vitamins & Supplements” report by The Hippocrates Health Institute.

Dl-alpha-tocopherol acetate is a synthetic kind of Vitamin E. Not only is the synthetic kind only 12% as effective as natural Vitamin E, it is often created as a byproduct of a petrochemical dependent manufacturing process.11,12 It also has been associated with an increased risk of hemorrhagic stroke, DNA damage, and other adverse effects.13

Ferrous sulfate: a synthetic form of iron, and can cause constipation, nausea, allergic reactions, and gastrointestinal issues.14

Niacinamide is a synthetic form of vitamin B3 and its side effects15 include a few dozen conditions, including liver failure.

Manganese sulfate is made “from the reaction between manganese oxide and sulfuric acid” and is often is used in paints and varnishes, fertilizers and fungicides, and ceramic, besides medicines (manganese itself is a mineral).

Calcium Pantothenate is a synthetic substance made from pantothenic acid, trying to mimic natural vitamin B5.

Vitamin A Palmitate is a synthetic form of vitamin A, which like many others above can cause liver damage and stomach issues.

Zinc Sulfate is an organic form of zinc and can be toxic to cells, as well as dangerous to the environment.

Sodium molybdate is a chemical form of sodium, and it has shown to have negative effects on fertility in animals.

Other synthetic vitamins are also included, and additional ingredients are: Whey Protein Isolate (likely from cows fed GMO corn), Citric Acid, Ascorbic Acid (a synthetic form of vitamin C that is usually inorganic and hard for the body to digest), Folic acid, Biotin, and Vitamin D3.

This is just the ingredient list of one of Ensure’s top products, and as you can see it’s basically nutritionally worthless compared to real, honest food.

“Soup is good food. Pudding can be good food too, if it has real milk and egg in it … But, this swill (I don’t know what else to call it) from Hospice is completely vile,” Krause wrote on her blog in September 2015. “It’s not real food, only a collection of starches, sugars, artificial flavors and nutritional powders all mixed into water.”

Like many people are beginning to realize, to pretend that Ensure and similar drinks are real food can be dangerous to a person’s health, Krause wrote:

“Maybe someone who spends their life eating at fast-food joints wouldn’t object to eating Ensure products, but I do, because I know the difference between real food and fake food…”

“I wouldn’t feed this stuff to a dying animal, let alone a dying human being. If you agree, let the hospital management know. Or snipe at them via social media until they begin to pay attention. I think it’s time for a food fight!”