Amyloid is the toxic protein known to accumulate in the brains of Alzheimer’s patients. The compounds also significantly reduced cellular inflammation, an underlying factor in the disease’s progression.

This isn’t the first study to investigate whether the active compounds in cannabis might play a role in battling Alzheimer’s, but it’s the first to find a double-tap effect against both amyloid beta proteins and inflammation. 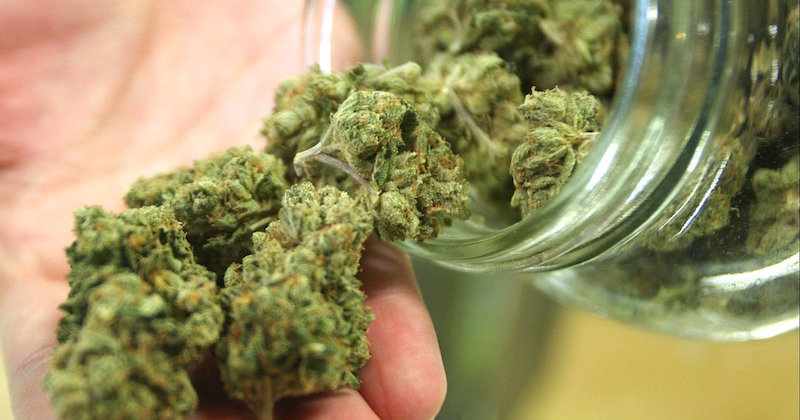 “Although other studies have offered evidence that cannabinoids might be neuroprotective against the symptoms of Alzheimer’s, we believe our study is the first to demonstrate that cannabinoids affect both inflammation and amyloid beta accumulation in nerve cells,” said Professor David Schubert, senior author of the study, in a Salk Institute press release.

The brain produces its own cannabis-like molecules, endocannabinoids, which play a signaling role between cells, but also seem to protect nerve cells from inflammatory amyloid damage. THC in cannabis activates the same receptors as the body’s endocannabinoids.

“Inflammation within the brain is a major component of the damage associated with Alzheimer’s disease, but it has always been assumed that this response was coming from immune-like cells in the brain, not the nerve cells themselves,” said Antonio Currais, a postdoctoral researcher in Schubert’s laboratory and first author of the paper.

“When we were able to identify the molecular basis of the inflammatory response to amyloid beta, it became clear that THC-like compounds that the nerve cells make themselves may be involved in protecting the cells from dying.”

Research on amyloid beta indicates that the protein accumulates for many years before the onset of Alzheimer’s, possibly over decades in some cases. If that’s true, then taking steps earlier in life to decrease its accumulation makes sense. The latest study suggests that the active compounds found in cannabis could help by removing amyloid beta from neurons, similar to the protective function of the body’s home-grown endocannabinoids.

“It is likely that the accumulation of intracellular aggregated protein in the brain occurs throughout life, contributes to cognitive aging, and may also be involved in the initiation of many old age-associated diseases,” said the researchers in the study.

Worth noting:  Exercise increases the body’s production of endocannabinoids, which is yet another excellent reason to do it. Aside from its many other well established benefits, exercise may also boost neuroprotective effects against Alzheimer’s and other neurodegenerative diseases like Parkinson’s.

The researchers emphasized that the study is preliminary and the findings haven’t been tested outside a lab, yet. The next step would include clinical trials. So at the moment there’s nothing solid enough here to support using pot or increasing dosage for regular users.

Plenty of research is being conducted on the active compounds in cannabis and this is one of the more intriguing findings to come from those efforts of late, but it’s far from conclusive. Put this one in the “promising but not actionable” column for now.

The study was published in the journal Nature: Aging and Mechanisms of Disease.