Many people love to eat potato chips like the famous “stackable” Pringles. But did you know that these delightful snacks may contain a harmful cancer-causing chemical? Dr. Joseph Mercola explains how Pringles and other potato chips can lead to severe health problems.

Contrary to popular belief, not all potato chips are made from actual potatoes. For example, Pringles potato chips are a mix of wheat, rice, corn, and potato flakes that are pressed together. The dough-like substance is then rolled out into a very thin sheet and cut into chips by a machine.

“The chips move forward on a conveyor belt until they’re pressed onto molds, which give them the curve that makes them fit into one another.

Those molds move through boiling oil … Then they’re blown dry, sprayed with powdered flavors, and at last, flipped onto a slower-moving conveyor belt in a way that allows them to stack.

From then on, it’s into the cans … and off towards the innocent mouths of the consumers. ” (link)

This Carcinogen Lurks In Your Favorite Snacks

Acrylamide is a harmful and potentially neurotoxic chemical that is made when carbohydrate-rich foods like potato chips and French fries are cooked at a high temperature (above 212°F or 100°C), whether fried, baked, toasted, or roasted. When the heating turns the food’s surface into a dry brown or yellow color, acrylamide forms. 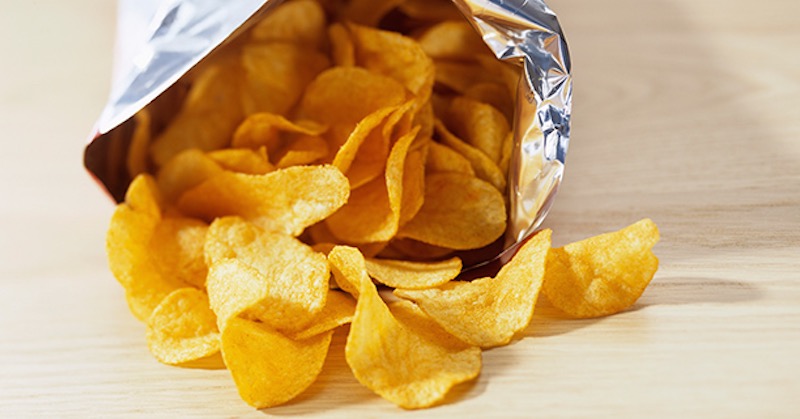 Foods that contain acrylamide include:

Dr. Mercola says that for drinking water, the federal limit for acrylamide is only 0.5 parts per billion, or at least 0.12 micrograms in an eight-ounce glass of water. This is why it is disturbing to know that a six-ounce serving of French fries contains at least 60 micrograms of acrylamide—500 times over the allowed limit!

Dr. Mercola says potato chips also contain high amounts of this hazardous chemical. A 2005 report issued by the California-based Environmental Law Foundation (ELF) detailed the dangers of acrylamide in potato chips. Their analysis revealed that all potato chip products they tested went beyond the legal limit of acrylamide by a minimum of 39 times and as much as 910 times! The worst offenders included:

This prompted the state of California to sue potato chip makers for failing to warn consumers about the health risks of acrylamide in their products. A settlement was only reached in 2008 when Frito-Lay and several other potato chip makers reduced the acrylamide levels in their products to 275 parts per billion (ppb) by 2011—this is low enough to avoid needing a cancer warning label. However, there is still no update on whether they complied with the settlement.

Dr. Mercola also warns that baked potato chips, often touted as “healthier,” also contain acrylamide. In fact, they may even contain more than three times the level of acrylamide in regular chips!

Other Dangers Lurking In Your Potato Chips

Aside from acrylamide, there are more than 800 heat-induced compounds—52 of which are potentially carcinogenic—created when potato chips and other foods are cooked at high temperatures. Dr. Mercola says some of the well-known toxins created when heating food include:

What’s The Best Way to Avoid These Toxic Hazards?

Potato chip and junk food manufacturers are continuously searching for ways to improve their products. One example is Pepsi Frito-Lay’s attempt to reformulate their products with all natural ingredients. Although it is less toxic, it is still not healthful.

This article was originally published in DrMercola.com, republished here with permission.